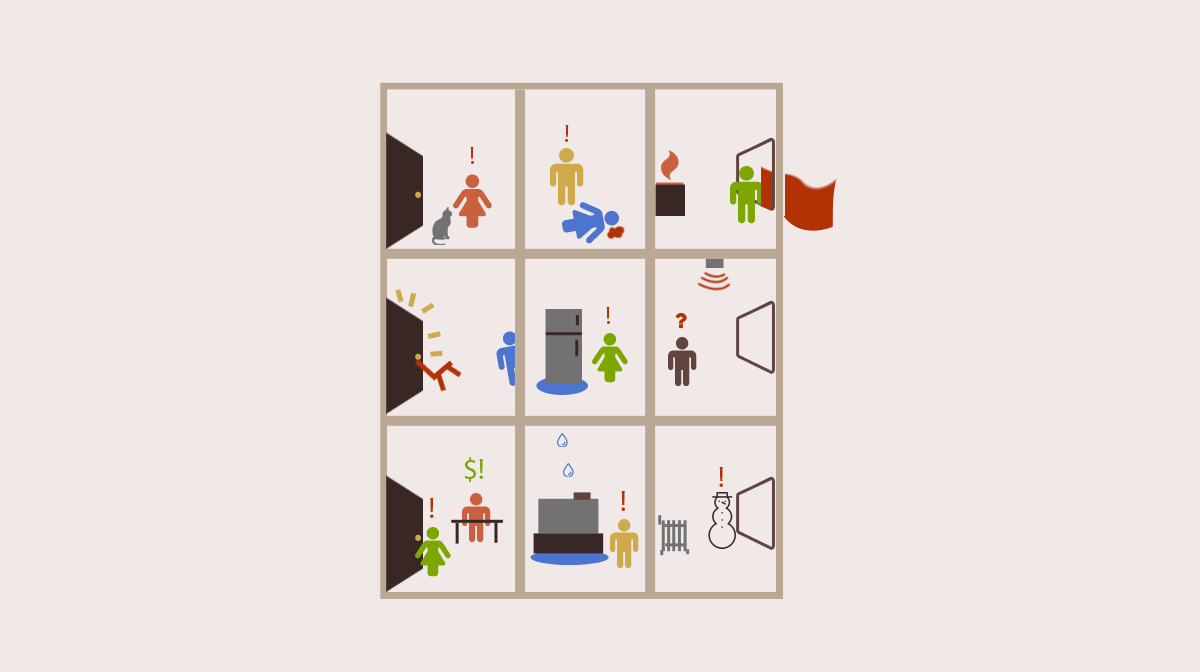 What would you as a renter consider to be an emergency? Natural disasters, certainly. Fires, floods and terrorist attacks are all probably on the list. Some of you may have even thought about what you would do during a zombie attack. But what about more personal emergencies such as illnesses and overdoses? What about maintenance emergencies in your apartment that you cannot repair on your own?

There's plenty of sites that will give you guides on what to keep in assorted kits for use in case of emergency. The Department of Homeland Security has a good one at Ready.gov but it lists items for a bare minimum kit to use in a true weather or war-related disaster. Government emergency preparedness sites focus on major disasters that would affect huge swaths of the population. It doesn't necessarily address the all of the real life needs of urban renters nor does it consider less serious personal emergencies that may still be life-threatening or at least hazardous.

Our list today will focus on the things that the government sites leave out. This is not to discount the lists that they provide - by all means keep those plastic sheets and bottles of water on hand if you want to. Rather, it provides things that renters should add to their list of emergency supplies on top of the more well-known lists.

1. Three months of rent in a separate bank account.

There are so many people who remain in dangerous housing because they can't afford to move. You should always be ready with three months of rent on hand - enough to cover a new security deposit, first month's rent, moving and utility setup costs. You never know when you're going to have to move in a hurry or come up with extra cash. Your roommate might get arrested. You might break up with your partner. Your landlord might sell the building to the Trump Organization. No matter the cause, always have the cash on hand to get out in a hurry. It's best to set this aside in a separate bank account and a separate bank from the one you normally use and limit your access to it. Get an ATM card only, or ideally no card at all.

2. Something bright to hang out the window.

The government list says you should keep a whistle on hand to signal for help. If you live 40 stories up in the air a whistle won't do much good. You'll need some way of signaling to people on the ground that you're still alive up there. A bright piece of sturdy fabric such as a gaudy shower curtain or a flag are the best options as they're designed for prolonged exposure to the elements.

3. A stock of all medications you use - both legal and illegal.

...or the means to stave off dangerous withdrawal. The government lists tell you to keep prescription medication on hand but for obvious reasons they ignore other addictive substances. However, there's no denying that many renters are dependent on a multitude of substances that government lists ignore. Severe addicts may not be able to trust themselves to keep a supply on hand for emergencies but should know their plan to avoid life-threatening withdrawal in the event of major disasters.

4. A way to stop overdoses.

If anyone in your home uses a substance that could cause an opiate overdose such as heroin, oxycodone or vicodin, take advantage of current Good Samaritan laws and keep some Narcan on hand. Narcan, or naloxone, is a prescription drug that can stop an overdose. It can be obtained from the Chicago Recovery Alliance at scheduled times and locations throughout the area. Since 2012 you do not need to be a doctor to give Narcan to someone in the state of Illinois. You and the O.D. victim cannot be charged for drug possession for using Narcan. If you are outside of Chicago and would like to search for Narcan sources near you, the South Boston Hope & Recovery Coalition has a list that can be searched by city and zip code.

Chicago law states that a landlord has three days to restore life essential services after an outage. This means that if your heat goes out in the winter you could be without it for three days. (Along with your water, power, gas service, etc.) The government lists mention that you should keep cold-weather clothing on hand, but this will not suffice in Chicago's brutal winters. Some kind landlords keep space heaters on hand to loan out during heat outages, but many do not have this kind of foresight.

Floods, spills, leaks and burst pipes are all part of living in high density housing. No matter the source, strange liquids in your apartment can be hazardous, smelly and destructive. If you have easy access to laundry then it's fine to use old towels or t-shirts to mop up liquids and grease, but for those who must go to the laundromat or basement coin op laundry room you may not want to have smelly fabric lingering about until your next laundry day. Cat litter is a great and inexpensive alternative. It's absorbent and disposable.

Unless you live in an apartment with a ceiling that's far lower than it ought to be, you will need help to reach the ceiling. You may also need help reaching other items that are beyond arm's length, such as appliances that are plugged in and standing in water, or the smoke detector you accidentally set off by overcooking pizza in the middle of the night. It's also handy to let your neighbors know that they're being too noisy.

Some emergencies are more humanitarian in nature. Baby food has a lot of uses for both humans and pets. It's bland, it's cheap, it's nutritious, it keeps well, and it's totally non-solid. The "stage II" meat-based baby food is not only useful for sick humans but also sick pets and the occasional litter of abandoned puppies or kittens as long as it's free of garlic and onions. Baby food is not adequate for adults or pets in the long term - it lacks fiber and certain necessary nutrients - but in a pinch it's good to have on hand.

9. Some way of blocking your door, and a paper clip.

If someone's trying to get into your apartment you'll need to block the door from the inside. You can use folding chairs. You can use a piece of 2x4 lumber across the door. You can use one of those metal poles that you jam under the doorknob. However, you should also have some way of getting into lockable rooms within your apartment. Disturbed roommates or family members may lock themselves in their room or you could just accidentally walk out of a room with the lock button still depressed. Most interior doorknobs have small holes on the side without the lock button. You can slide a paperclip or safety pin into them to pop the lock open from the outside. Obviously this should only be done in case of emergency and not to violate the privacy of your roommates.

10. A backup cooler, cooking device and way to make fire.

When you own your own place you can replace a broken fridge or stove quickly. When you rent, you're at the mercy of your landlord for replacements. Folks with gas stoves may find their gas line disconnected. Keep a portable cooler on hand in case the fridge goes out. Keep a secondary cooking device - a toaster oven, hot plate, grill or microwave - in case the stove goes out. Chances are that an appliance outage will mean you're eating out for a few days, but it's going to be much easier on your wallet if you have a fallback option on hand already.

What unique things do you keep on hand for emergencies? Did we jog your memory about something you're missing? Have you ever found yourself in a jam wishing you had some specific item? Let us know in the comments!

2 thoughts on “Renters, Here are the Emergency Supplies That Nobody Mentions”