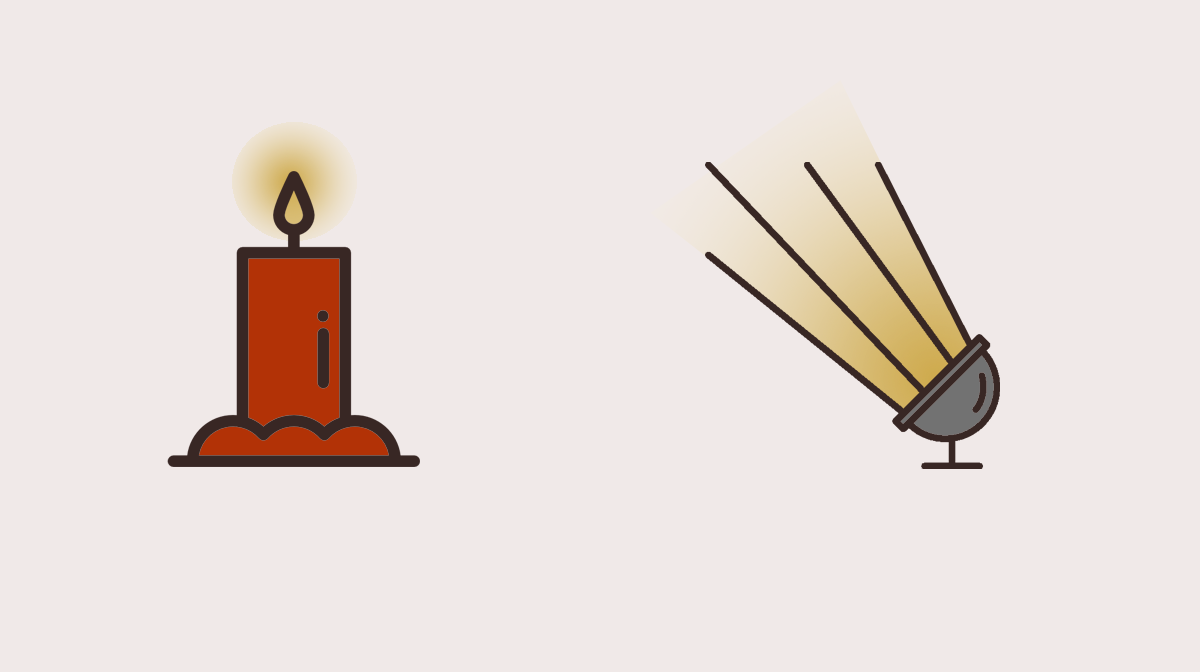 Marta and James Chandler grew up with their mother Simone in Carbonville, a neighborhood on the west side of a big city in the US. Candles were the lighting source of choice in Carbonville. Every night as Marta walked home from school she could see candle after candle in the windows of her neighbors, lighting her way back to her own candlelit home.

Candles had their drawbacks. They were temporary and fragile. They slowly vanished as they were used. The slightest gust of wind or clumsy handling would extinguish them. Sometimes someone would get a little crazy and knock over a candle, setting a whole building on fire. If you didn't know how to light them properly you could burn yourself. Outsiders thought the Carbonville residents to be a bit peculiar. "Always setting their houses on fire. Such a pity."

Simone taught her children the right way to care for candles. In their window was a glass prayer candle, long lasting and significant. Carbonville had lots of candle sellers and shops where you could get candle accessories. When she was a girl, Marta's favorite candle enclosure was the pumpkin. It was as short-lived as the candle itself, but it was so pretty and she could customize it in all sorts of ways. James preferred fancy candles shaped like dragons and race cars.

As a teenager James got a job as a bike messenger. He got to visit other areas of the city, such as Edison Park on the east side. In the evenings he told his sister stories of houses in Edison Park with spotlights instead of candles. Their brightness was almost overwhelming. Through the windows he could see that the spotlights were big and solid, indestructibly encased in metal and glass. They were plugged into the mains and blasted huge rays of light into the night sky with a push of a button. Marta thought that was a marvelous idea.

When they were little, James and Marta had a school friend named Richie Cera. James learned that Richie had moved from Carbonville to Edison Park and went to visit him one day on the way home. He was surprised to see that Richie only has a little squeezie flashlight from the drugstore. James asked, "Why do all of your neighbors have big solid spotlights and you only have this little squeezie light?"

"I wanted to move up," said Richie, "but around here you can only have a spotlight if you can afford it and if your family members are electricians. So I did the best that I could."

"Why, that's preposterous!" said James. "My candle can put out more light than this squeezie light."

"Oh, candles." scoffed Richie. "Around here we only fall back to candles in emergencies. We need bright electric lights to keep away Carbonvillains, they'll come and burn down your house!"

James went home and told Marta about his visit with Richie. "What is the use in buying an electric light?" he wondered. "I will never be able to have a big spotlight like those guys because I have no electricians in my family. The candle is just as good, I'll just have to replace it now and then." James set about to making his candle the best it could possibly be. He put it in a hurricane lamp and treated it with care. He was certain that he could, with a little effort, make his candle last forever. He got used to the occasional burn. After all, they heal over time. His goal in time was to upgrade to a big flaming torch that would provide light for his whole family and the entire block.

As Marta got older, she got a job downtown. There she met and started dating a coworker named Mark Wolfram. Wolfram came from a long line of Edison Park electricians. Eventually she married into the Wolfram family and got a spotlight of her own. But when she finally got her spotlight she was unaware that bulbs must be changed - at great expense - and the power that runs the spotlight is not cheap either. She wanted to take good care of her spotlight so she put in a pumpkin to keep it safe, just as she had been taught.

At garden parties her new neighbors talked of getting newer, fancier bulbs. They spoke in hushed, awed tones about Mr. Joule down the block who had converted to solar, eliminating the expense of power for good. Most of it went over Marta's head, although she slowly learned to tell the difference between an LED and a CFL. She could talk the talk, but her neighbors still laughed behind their hands at her pumpkin and her struggles to afford replacement light bulbs for her new big spotlight.

"Did you know the Chandler girl comes from Carbonville?" they gossiped. "Hope she doesn't burn down My house!"

"Oh, I wouldn't worry about it," replied another. "She married a Wolfram and I've never questioned their judgement."

"Well I question Her judgement. Pumpkins, really? Doesn't everyone know pumpkins are a big superstitious money sink? They rot, they stink, and hers isn't even organic! Why, My spotlight has an heirloom metal enclosure passed down from my grandmother."

"Pumpkin vendors are everywhere in Carbonville. She probably doesn't know any better. Poor dear, she's really in over her head!"

When Marta went home for Christmas she told her mother and brother about her new life. "Mr. Joule owns a lighting factory," said Marta. "He makes candles and he makes spotlights. But he only sells candles in Carbonville and he only sells spotlights in Edison Park. He says there is no demand for spotlights down here and there is no need for candles up there. But spotlights are so expensive! I had no idea. I might have learned how to take care of candles but none of that prepared me for having my own spotlight."

James laughed at her complaints about spotlight life. "Joule has the right idea. You should have stuck with candles and you would have no such money problems!"

Over time Marta settled into her new life in Edison Park. The price of bulbs was consistent, the technology kept getting better to make them last longer, and the price of power was pretty stable. It still took almost every penny of her job to keep the spotlight running, though. Even though Carbonville residents had tried to become known as respectable "Carbonvillagers," the old "Carbonvillain" tag still stuck around like glue, especially among hiring directors. Outwardly they said that Carbonville folks were tough to employ because they had no history with electrical work. But everyone knew the real reason. After all, it was Carbonville folks who worked in Joule's factories, and it was Carbonville residents who were largely called in to fix the spotlights in Edison Park when they went on the fritz. Edison Parkers might have had electrician lineage but they sure didn't like to risk getting shocked.

James started to struggle. The cost of candles kept going up. No matter what he put his candles in, they still eventually used up all their wax and disappeared. Finally disaster struck. James called Marta, saying "My daughter accidentally left the candle burning all night and I can't afford a new one. Looks like we're gonna be in the dark for a few months."

"Mr. Joule has a place with a squeezie light down the way," said Marta. "You could crash there for a while."

"No way am I paying Joule's prices for a squeezie light!" replied James. "Mr. Fancy-Pants Solar himself. Pah! We'll just be in the dark for a bit until I'm on my feet, then I'll get a new candle. Maybe I can stay with Mom for a bit, that old prayer candle still has some life in it yet."

"Maybe you should consider getting a spotlight instead?" countered Marta. "The prices are coming down and it isn't so bad, really."

"Cheap knockoff spotlights, maybe. You and I both know that the best spotlights are only for electricians. And after watching you deal with yours I'm sticking with candles for life!"

Marta and Mark struggled on until one day Mark tried to do some work on the spotlight, just a little quick fix. It was just a slip, a crossed wire, but Mark was laid out flat on his back by the current. He wouldn't be able to work again and there was no way Marta could maintain the spotlight on her salary. So back they went to Carbonville.

These days Marta has the best and most celebrated jack-o-lantern on the block. James got through his dark patch and eventually saved up enough for a big bright torch of his dreams. Simone passed on a few years ago and the old prayer candle is now used by some friends of the family. But if you ask either of them about getting a spotlight they will both say, "Never again!"

Think about that question for a second. Now go back to the top of this article and read it again.