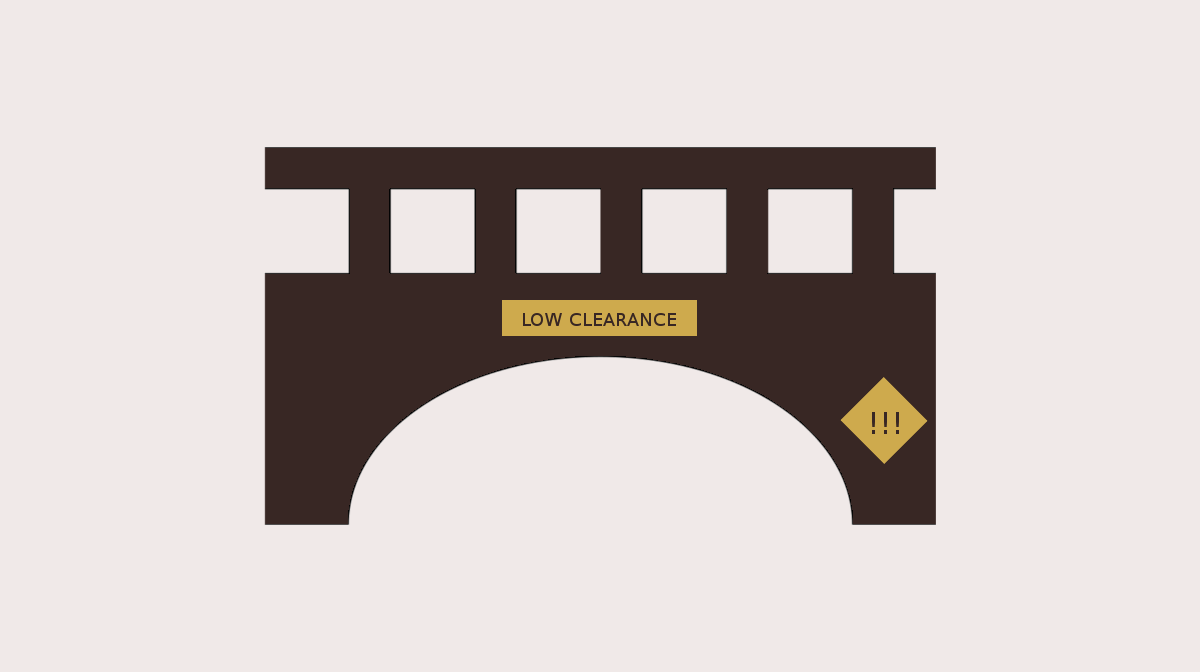 At 5'-4", I'm not what you would call a tall person by any stretch of the imagination. But I do have a room in my home with very low, slanted ceilings. Everyone hits their heads on it. After ten years living here I still hit my head on it occasionally. It gives me a little insight into how life would be if I were a little bit taller. (Chances of that ever occurring are about as likely as the those of becoming a baller.) When you're short you usually don't have to worry about tall people problems like hitting your head on doorframes, ceilings and low-hanging light fixtures. But even as a short person, when the ceiling comes down to meet you there can be some moderate head trauma.

The same thing happens to drivers who are accustomed to passenger vehicles when they find themselves driving moving trucks around the city. A regular reader recently shared a tweet from the City of Boston attempting to address the number of moving trucks that get stuck trying to cross under the many bridges with very low clearance on one of that city's main arteries, Storrow Drive. Out there it's called "getting Storrowed" and it happens every year, causing backups and tons of damage to newcomers who may or may not have gotten that insurance upsell for their rented moving trucks. In North Carolina one 11'8" bridge is affectionately called the "can opener" for the same reason: it notoriously rips the tops off of trucks driven by drivers who ignore the very obvious clearance warning signs.

There's plenty of low bridges in Chicago. We've got highways, train bridges and viaducts running all over the city. Many of them, like the ones that run under the Red Line and Lake Shore Drive, are in locations where it's a very bad idea to get stuck, especially during rush hour. You can cause traffic jams. You can damage the truck. You can damage the bridge. Some of those bridges, especially the old CTA and Metra bridges, are very, very old. If you're moving in a big truck you definitely want to avoid these areas at all cost.

Your GPS will not tell you to avoid them. Google Maps will not let you plot a route that avoids bridges. Even commercial drivers must still carry pocket printed maps or specialized GPS devices to know where they are.

There is no data about these bridges that I could find on the city's data portal. There's some crowd-sourced information on OpenStreetMap, but a lot is missing. The 49th ward's website has a map of bridges with clearance heights but it only includes the bridges within that ward. But there is a 45 page long PDF table of data listing all 1666 viaducts and bridges citywide. So I figured it was time to make a map of every bridge in Chicago along with their clearance heights in the hopes that maybe a few movers can avoid being the subject of embarrassing Youtube videos. (At least for this particular reason!)

Before I get to the map, I should note that this data is old. I pulled it from a PDF generated by CDOT in July of 2012. Certain bridges have been altered or even removed since then. I should also note that some of these bridges have no posted heights. If the height is not posted, you can expect it to have at least 14'6" of clearance.

It's also worth noting that not every truck will have problems getting under every bridge. I could not find the heights of trucks from Ryder, Penske or Enterprise on their websites but I did find heights for Budget and U-Haul Trucks. To be on the safe side, make sure your truck has at least a foot of clearance before trying to go under a low bridge, or even better, plan a travel route that avoids low bridges entirely.

If you know someone who is moving to or through Chicago in a big truck this coming week (or at any point in the near future), make sure to share this map with them so they can avoid any bridge-related hassles along the way!

PS: Due to the huge number of points I've relied on Google's Geocoding to handle most of the conversions from address to map location. If any of them are off, please let me know!