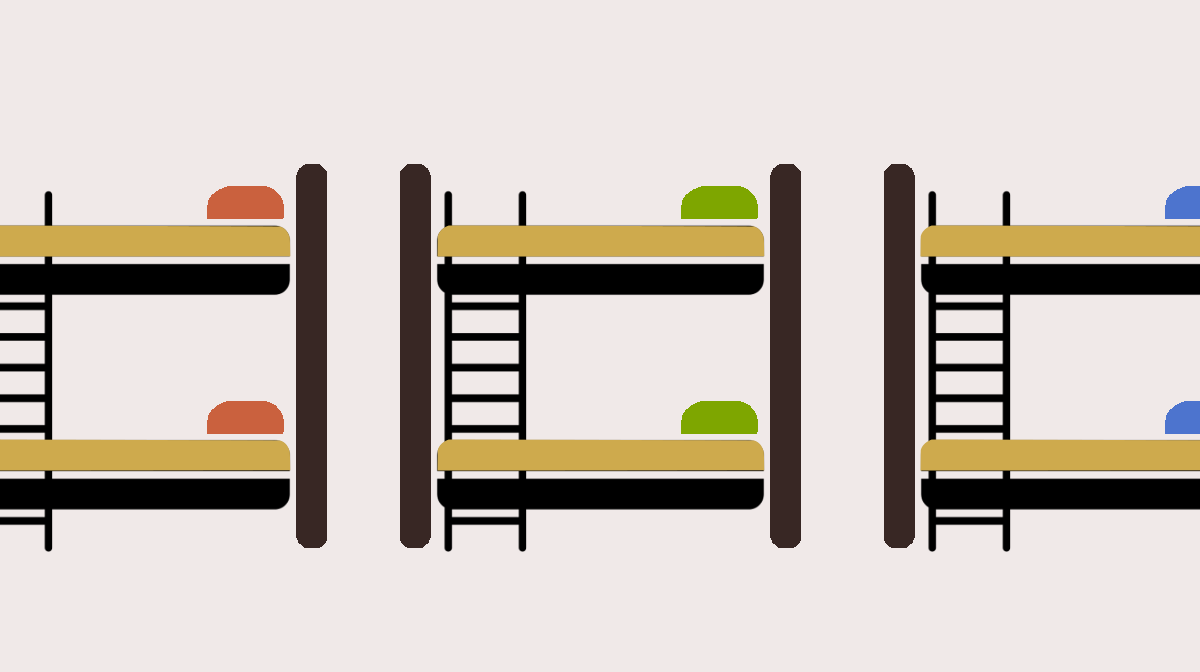 My question is, would Podshare work in Chicago? If not, would the similar Japanese style of capsule hotels work instead?

The Wheels to Reinvent

Co-living is already existent in Chicago, but only in the suite format. Several communities already exist in Lakeview, Ukrainian Village, Pilsen, West Loop, Logan Square, and more locations opening regularly. However these properties offer private rooms with doors and walls as part of shared 3 or 4 bedroom suites. They offer many of the same selling points as the ones causing all the controversy in California, but not the open room bunk-bed arrangement.

This is not to say that the bunk-bed arrangement doesn't exist in Chicago. Students in university districts and residents and interns in and around the Medical District have been doing it for ages. Day laborers have been doing it for ages as well, sharing studios and sleeping in shifts. All the Podshare model is doing is making this sort of arrangement palatable for a new race and class.

Chicago actually has a vested interest in promoting businesses of this nature. As long as they can be classed as single-room occupancy housing they fall under the SRO Preservation Ordinance. As long as the prices remain low they qualify as Affordable Housing. The fact that they're being marketed as a lifestyle choice to underpaid hipsters instead of as homelessness prevention facilities is immaterial to both the city and the developers.

But Chicago also has a huge amount of affordable, undeveloped land, most of it in struggling communities across the south and west sides. These neighborhoods desperately need new faces, new businesses and new community development. Yet they sit largely abandoned while developers instead dice up the established high density trendy areas into smaller and smaller pieces. Chicago has such a fear of the South Side that they'd probably rather take on a merger with Niles, Lincolnwood and Evanston before they made a real effort to develop the existing land south of 35th St.

There are several personality trait models out there developed by psychologists and sociologists. One of those models, the five-factor model, was used to compare dominant personality traits in various cities across the US. Mapping the five-factor model against the target customer of a co-living facility, you'd want to see a population that's extraverted and open, but not very neurotic, agreeable or conscientious. Basically you want chatty rebels.

San Franscisco residents tick all of those boxes. Los Angeles residents do too. Chicagoans satisfy four of the criteria: we're extraverted and open. We're not neurotic and we aren't agreeable. But we are conscientious. When faced with a task we tend to get it done without handholding or needing a push. Faced with high housing costs we'll come up with workarounds and checklists. We'll try adjacent neighborhoods, roommates or the suburbs. I think Chicagoans would see moving into a co-living environment as giving up, and I don't think they'd be to keen on that.

More importantly, those traits apply not only to the target customers but also to the opponents of high density housing. NIMBYs in Chicago have caused multiple attempts to create or preserve existing affordable housing to struggle or fail outright. Shared housing saw heavy resistance resulting in a stifling ordinance. Single room occupancy properties required an ordinance to protect what little of it remains. The Affordable Requirements Ordinance has been plagued with resistance, zoning loopholes, financial loopholes and slow uptake for its entire existence.

Obviously some form of co-living is already working in Chicago. Existing businesses are doing their thing and they seem to be filling the beds. Housing co-operatives have been around for decades and they also have their advocates. But the question is how long they will survive. Co-ops have struggled to take hold in Chicago. They are mostly the domain of residents who wanted a say in who could and couldn't join their community.

All the coverage of Podshare to this date states that it is a response to extremely high rents in Los Angeles and San Francisco. The downtown LA location in the Arts District offers a 30 day stay in a twin-sized bunk bed for $1000.20. 1 bedroom apartments in this same area are going for $2000-3000 per month. The San Francisco location, close to the Tenderloin neighborhood offers the same for $1200. 1 bedroom apartments in this area list at $1595-3000. So basically they are expecting that a 50% discount on housing along with some basic staple foods and networking opportunities will be a valid tradeoff for the loss of privacy.

To see if this is a valid business model in Chicago we first have to consider which neighborhoods they might choose for sites. Out west they selected districts that are trendy, a little gritty, and attractive to artists. I'm guessing they might pick Wicker Park ($1200-2600 1 beds), Pilsen ($650-1700), River North ($1000-3000) or West Loop ($1500-3000). In all areas except Pilsen, which already has a lot of informal co-living arrangements, the prices are comparable to what we see in California. These are all areas that already hae private-room co-living.

Provided the city wouldn't opt to create a new type of housing definition to cover bunk bed style co-living, finding its niche under the current definitions would depend on whether they decide to call them "transient" or "non-transient" housing. All licensing, inspections and zoning would depend on how the city chooses to classify the business. Either way these businesses would likely be restricted to high density residential areas.

As far as I can tell, it most closely resembles boarding houses, since food and furnishings are provided and occupancy is billed by the day or month. This would place it within the realm of transient housing along with hotels, hostels and shared housing. But Chicago defines hotels as having at least seven separate sleeping rooms for guests. In fact Chicago prohibits advertising of shared housing for dwelling units with six or fewer sleeping rooms. It could also qualify as a bed-and-breakfast, which would allow it to have 11 or fewer sleeping rooms, but these must be owner-occupied to qualify.

However co-living could also fall under the umbrella of "Group Living", specifically "Group Living Not Otherwise Classified" as dictated by the Zoning board. This would make it non-transient housing, like apartments, dormitories or monasteries. Other types of group living we already know about include nursing homes, community homes for the disabled, temporary shelters and domestic violence shelters. If Chicago decides to classify co-living as Group Living, we've got zoning restrictions capping max occupancy to 15 people per dwelling unit. The city defines dwelling units by the number of fully-equipped kitchens.

The existing co-living facilities are licensed as single-room occupancy businesses (SROs), which means the city is counting them in the grey area between transient and non-transient. This is fitting. However, SROs need to have some sort of partition between sleeping areas. The Podshare arrangement wouldn't qualify. The real sticking point comes from the space requirements in the Existing Buildings code, specifically clause 13-196-490. "Every room occupied for sleeping purposes by more than one occupant shall contain at least 50 square feet of floor area for each occupant 12 years of age or over." They would have to make larger sleeping quarters, which would in turn make the bunk beds moot.

If there's one thing I learned from showing thousands of apartments, it's that Chicago residents show a very different face to the world from the ones they wear at home. We need a place where we can close the door and be away from everyone else. Chicagoans seem to be very outgoing and receptive, but if you're an interloper in their home (as leasing agents often are) they can be quite hostile. Laws and cost viability aside, this one factor makes me think that bunk-bed living probably would result in a lot of hostility and conflict. Bunk beds bring to mind a military barracks or a religious sect. They're for people united in a single purpose with a relatively unified moral code. That really isn't a thing in Chicago, a city less characterized by "love everybody" than it is by "think independently." However, there is another similar arrangement which is popular and well-established in Japan that might work. I am of course talking about the infamous capsule hotels.

Japan's capsule hotels aren't meant for long-term living. They're offered as a cheap alternative to hotels rented by the hour in an area where, like San Francisco, vacant land is practically non-existent and earthquakes make new construction a very expensive endeavor. But they offer the one thing lacking in the Podshare model: sleeping areas with doors. The tiny cubicles of capsule hotels might inspire claustrophobia, but you can close the door and get away from the rest of the world. They also come with a certain global economy cosmopolitan high tech flavor that Chicagoans tends to enjoy.

Of course Chicago has enough land to mean that capsules are unnecessary. We can have rooms with doors and windows. It would be a somewhat silly project. But in a distant future where vacant land becomes scarce, I would venture that capsules would be more palatable to Chicagoans than open bunks.

There's definitely a market for co-living in Chicago right now. Whether it turns out to be an ongoing lifestyle or a flash in the pan remains to be seen. But when it comes to sleeping in bunk beds my guess is that Chicago will draw the line, either by legislature or outright commercial rejection. This city loves its secrets and doors almost as much as it loves pizza and dirty politics. I can't see Chicago renters throwing up their hands and surrendering to barracks-style housing.

The city's population has fallen steadily over the past few censuses. But if we keep focusing our residential development in a handful of trendy neighborhoods, eventually we will come to a crossroads in this city where we'll have to choose between our privacy and developing the fallow neighborhoods.