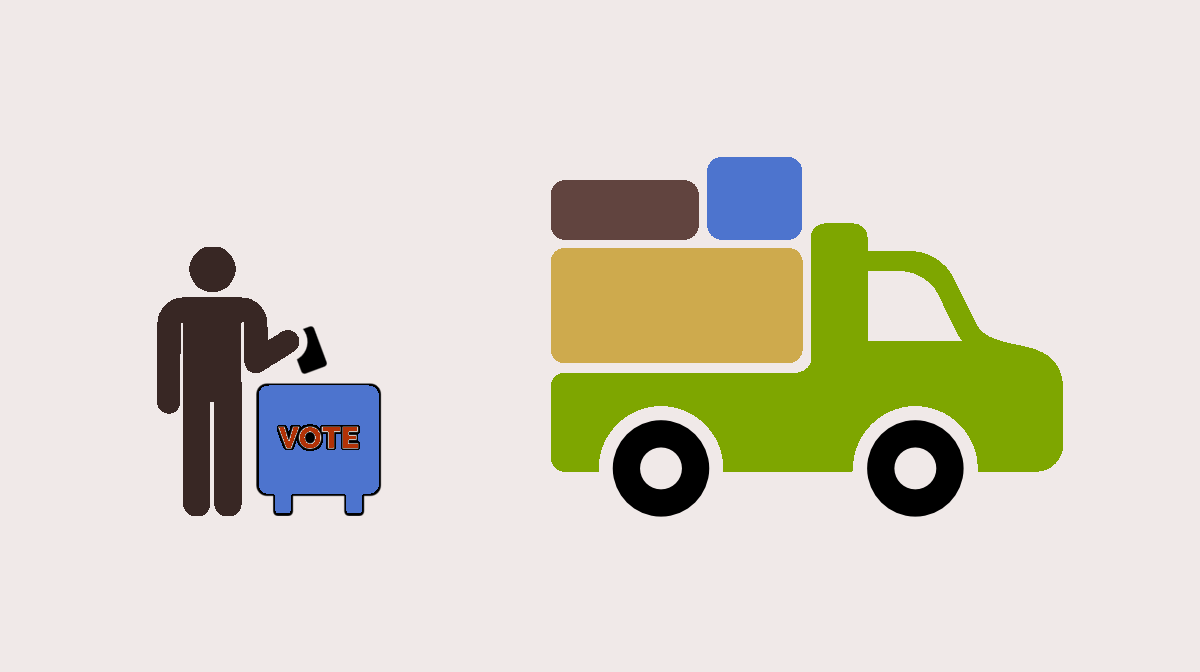 This year, the last day for online voter registration for the Illinois March 17 primary is February 29. However, the deadline for choosing where you will vote is this coming Monday, February 17, when early voting begins statewide.

Approximately one month later, the US Census Bureau will want to know everyone who is living under your roof on April 1 for the decennial census. For people who are moving, particularly those who are moving across state lines, these two events may mean that you have to make some serious choices with major consequences that could last for years. Today we'll look at these choices in detail.

Voter Registration and the Presidential Primaries

Technically the last day to register to vote in the Illinois Presidential primary is February 18. This is the cut-off for mail-in registration, and anything after that is considered to be a registration during the "grace period." However, Illinois residents can register to vote online or in person when obtaining a new driver's license until the last minute of February. They can also use same-day registration to vote in person at any early voting site between March 2-16, or on primary day, March 17.

However, for renters and buyers who are moving on March 1, early voting dates and the rolling schedule of primary elections across the country mean they are in a special situation where double voting can accidentally (or deliberately) occur, or where they can accidentally get shut out of voting altogether. There are several scenarios we must explore here.

Illinois to Illinois. According to the Chicago Board of Elections FAQ, folks who are moving between locations within the city of Chicago during the month before the primary must cast their votes at the precinct where they were living on February 16. If you are registering during the grace period, make sure that you are prepared to have your registration challenged at the polls. Bring acceptable forms of ID with you to your polling place. State IDs showing your old address are fine provided that you have backup documents confirming the new address.

Another State to Chicago. You can only vote in the Chicago primaries if you are living in Chicago as of February 16. If your move will occur after that you will need to participate in a primary in the state where you previously resided. Make sure you are registered to cast an absentee ballot in your former state if this is the case, provided it is legal for you to do so.

Chicago to Another State. Now things get complicated. 24 states plus Puerto Rico Republicans, the Virgin Islands Republicans, and American Samoa Democrats will all hold their primaries before we do. Three states (Arizona, Ohio and Florida) will hold their primaries on the same day as Illinois. The rest will occur after ours. Every state has different registration deadlines. If you are moving on March 1 to a state with a February primary (Iowa, New Hampshire, Nevada Democrats and South Carolina Democrats), you will want to cast an early vote in Chicago. If you are moving during the next 6 weeks to anywhere else in the country, you will want to pay very close attention to the registration deadlines and make your choice as to whether you want your vote to count here or there.

Every state in the country has laws on the books prohibiting double voting in the same election, although the definitions of "same election" vary and the laws are all unique per state. While there is a federal law on the books prohibiting voting more than once, nobody has to date been prosecuted for this offense at the federal level and the issue is extremely difficult to prosecute at the state level. Even so, running afoul of the state laws is still a felony offense so we do not recommend trying to vote at your old address and your new address during the Presidential primaries. If this sort of thing is important to you, pick the state where your vote will count the most and shape your move dates to fit.

What's more crucial is ensuring that people moving between states during the Presidential primaries do not get shut out of voting entirely. Pay very close attention to the deadlines in both locations and make sure that you will be on the voter rolls somewhere for the date of one primary election date.

The decennial census is a pretty crucial event. It's used to determine how many seats a state will have in the US Congress. The census is also used for allocating demographic and population-based funding for the next ten years. Businesses use census data for market research. Many companies use it for creating online heatmaps, which are then used by real estate shoppers to pick their new neighborhoods. Cities use it to determine locations for any number of projects, from job creation to housing creation to crime and homelessness prevention initiatives.

The census is at its core a snapshot of how many people are living at each address within the nation on one particular day every ten years. For the 2020 census, that day will be April 1.

This time around Illinois is at a huge, census-dependent crossroads where an undercount of only 1% of the population will mean the difference between us losing either one or two voices in the US House of Representatives. You know what else clocks in at about 1% of the population? The number of people who are moving during any given month. You guys need to make sure you get counted in the right place.

But this doesn't take into account several outlying circumstances, such as staggered moves, roommates spending the night in jail or the hospital, students in dorms, and delayed moves that might find you waking up in a hotel or on a friend's couch on the morning of April 1.

For these situations you must pick the location that you consider to be your usual place of residence when completing the census. Remember that this data will be used over the next ten years to determine pretty much everything that happens in your neighborhood. If you're staying in a temporary shelter for one night, use your new residence address for the census. If you're using a non-traditional shelter for long enough to start receiving mail there, then use that non-traditional address for your census location.

People who are moving over the next two months must take special care to ensure that their presence is recorded both for the census and for the presidential primaries. These two incredibly critical government initiatives will add an additional layer of complication to the already challenging process of moving, but they should not be ignored or forgotten in the chaos. March 17 and April 1 may both seem to be a long way off, but for people who are moving they need to be thinking about these issues now.

If you know someone who will be moving this spring, take a moment to share this article with them. Make sure they are giving some thought as to how their location over the coming weeks will be seen through the eyes of the Election boards and the Census Bureau. This is a time when people in the process of moving can have a huge impact on what happens in this country over the next 10 years, or alternatively they could have their potential impact completely erased due to lack of prior planning.