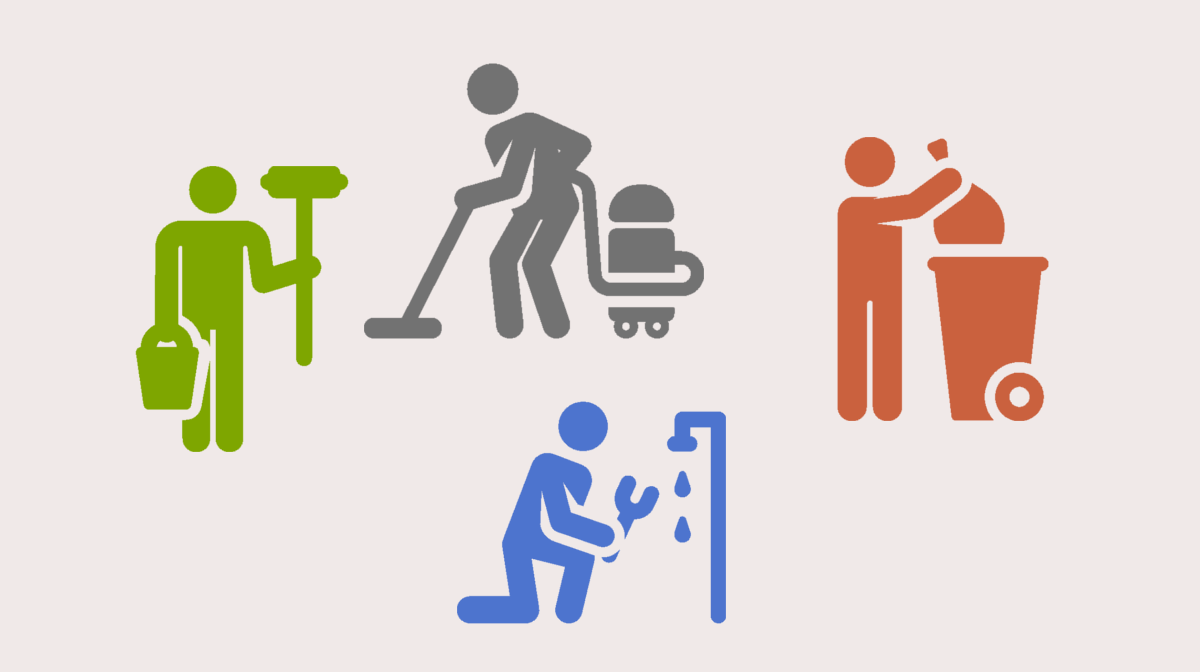 In today's article there will probably be several instances where I appear to be flaunting or failing to recognize my own privilege. I apologize if it comes off this way. It isn't the intent but I know full well that it will probably happen regardless.

There's been a lot of talk about how the COVID-19 pandemic will affect people who work in delivery, food service and healthcare. I've seen far less attention paid to the people who are supporting the homes that have now become de facto prisons and workplaces for much of the U.S. office labor force.

It is a reasonable assumption that the more people stay home from work, the higher the chances are that they will break things within their homes. Holiday weeks always prompt a flurry of maintenance calls due to increased demand on the physical plant of the apartment building. The same thing happens immediately following snow days when kids are often left at home unsupervised. With all of the recent news about businesses asking workers to stay home and schools closing to limit exposure to COVID-19, I have been thinking with some worry about the men and women who work on the maintenance teams for apartment buildings across the country and hoping they're able to weather the massive workload facing them in the coming month.

This is going to be one of those rare articles where I don't really turn to the available research. I'm going to use the property management company I worked for personally as my sole example to maybe help you understand the lives of the people who will be working to support the country as it collectively self-quarantines. Some maintenance workers out there undoubtedly have it better than our employees did. Others probably have a worse lot to deal with.

About My Former Coworkers

As regular readers know, I worked for a property management company that handled about 1000 vintage apartments scattered across about 60 sites on the north side of Chicago. We weren't a fancy, high end operation that offered benefits or even tax withholding to our maintenance workers. I've read about more professional operations who offer training and benefits to their staff, but that definitely wasn't how my former employer operated. We only had two W-2 workers in the entire company, and they were the ones who handled the tasks that required supervision of teams or skilled workmanship - design, engineering, estimating. Everyone else including me was employed as an independent contractor paid in cash. However, we were large enough to keep a full time staff on hand so that definitely put us in a league above the small private owners who hire contractors for individual repairs as needed.

I don't know how many other companies run along the same lines. My guess is that most of the vintage apartment management companies have very similar setups. I worked for this company from 2005 to 2010. I know they've added more buildings to their portfolio since I left. I don't know if they've changed the way that they handle staffing for the maintenance department. Property managers are generally slow to adapt to new procedures and technologies. Based on this 2016 article about maintenance hiring issues from the National Apartment Association, it sounds like not much has changed industry wide and that we were about average for a smaller portfolio. Yes, 1000 apartments is a comparatively small business in the property management industry.

We had a maintenance staff of about 15-20 depending on the season. Most of them were immigrants, I'm guessing many of them were undocumented. I didn't ask them. Half of our staff were from Central America or Mexico, the other half were from Eastern Europe. Not a single member of our maintenance crew was born in the United States.

Hiring was mostly done through the grapevine. If we needed someone, the owner or the property manager would ask our existing workers if they had family or friends who needed work. We didn't screen them because doing so would basically have been impossible given how new most of them were to this country and how cost prohibitive it is to do an international screen. We had two workers who had reasonably strong English skills and they were the only two that we would allow into occupied apartments. The rest worked exclusively on turnovers of vacant units, large-scale renovations, back-end maintenance work, landscaping, sanitation and snow removal.

My job was largely on the leasing side of things, along with some basic IT support for the office. I had minimal interaction with the maintenance crew. I knew who they were, I knew what they did, we interacted at the annual Christmas parties and I saw them in the early mornings when they came in to pick up their schedules for the day. But we had very little opportunity to converse since if they were working on an apartment I obviously couldn't be showing it to prospective tenants. Also there was a huge language barrier as I do not speak Spanish, Polish or Montenegrin. But I did pick up a few things about what their lives were like before they moved to Chicago.

One was a dentist when he lived in Mexico. For us he ran errands picking up supplies at Home Depot and delivering them to all of our active job sites throughout the day. Another had been a top level IT specialist in Podgorica. For us he handled day to day fixes in occupied apartments. I'm convinced that if a building had been stomped on by Godzilla that he'd have somehow been able to get it back upright within a day or two. They worked in maintenance because it's what they could get. Transferring their actual skills to the US would have required certifications, licensing and training that they either could not afford or could not qualify for due to language issues.

Hours were very long for all of us. As one of the fluent English speakers I was on call 24 hours a day and was in the field or in the office from 11am to 10pm six days a week. For the first two years on the job I worked seven days a week. Sales roles will do that to you. Not all of the staff was on 24 hour call. The task of overnight emergency calls rotated between a few of them who spoke reasonably good English and lived close enough to the properties. Overnight calls could include anything from overflowing tubs and toilets to locked out tenants and parking lot disputes. If first responders were called to a building, one of us had to be there too. If a tenant called for an after-hours lockout we would charge them a $25 service fee for the call which the responding technician could pocket, provided that the locked out tenant actually had the cash to pay them. Many didn't, but we wouldn't know until we got to the site. Any other calls were included in our hourly timesheets at the end of the week.

Most of the staff did not live in our buildings. The owner would sometimes offer them housing at a slightly discounted rate and take the rest of the rent out of their paychecks, but for most of them this was too steep for them to afford. They had families of their own and lived in other apartment buildings in less expensive areas of the city. We did have a few living in illegal units that we couldn't rent out to paying tenants, or in boiler rooms. We had one building with a full-time on site superintendent living in an actual apartment.

Some of them had great computer skills, others did not. Few of them had computers at home but they all had mobile phones. I highly doubt that any of them had ready access to medical care. Even the W-2 employees didn't receive health benefits even though they were regularly working with power tools, heavy fumes and human waste. Every one of us at one point or another had to climb into an overflowing dumpster to pack it down, me included. Hourly wages were minimal. I pulled in about $50-75k per year and only because I was paid on commission. I don't know the specifics but I'm sure most of them were earning minimum wage or less.

None of this means that the owners were cruel to us. They were kind, appreciative, grateful, albeit somewhat tight with the funds. They were always respectful to all of us in conversation and in assignment of duties. We were all treated as family, and there were side perks sometimes in the form of advice, in-kind services, etc. But there is no doubt that the staffing scenario for the maintenance department was suboptimal.

Be Patient, Be Gentle

I'm sure all of them are quite aware of COVID-19. I'm sure many of them are dreading going into work over the next few weeks. They'll be the ones going into apartments of quarantined individuals to fix things when they break. The law states that life essential services must be fixed within 72 hours. They can't wait for all of this to blow over. They have to go into the homes of potentially infected individuals to repair broken furnaces, water heaters and plumbing, the same plumbing that is likely to contain the most concentrated sources of bacteria and viruses in the entire place. They will not have N95 masks or gloves. They are not trained in dealing with hazardous materials.

If you're working from home this week, please be gentle. Please be patient. Live as softly as you can. Maintenance workloads will be at their absolute highest. Apartment dumpsters will be filling up at a much faster rate but pickups by trash haulers will not be accelerated to compensate. Things are going to break much more because people are home to break them instead of out of the house at work. Neighbor vs neighbor conflicts will escalate because people are home to get on each others' nerves. Stressed people who might normally be courteous to maintenance staff might get a little snippy. Workers who do not normally deal face-to-face with tenants due to weaker language skills or weaker customer service skills may be called up to handle those roles due to the excess demand. There are not many landlords or property managers who are going to tell their staff that they can "work from home" when your home is their workplace.

Immediately after this whole thing blows over, they will be heading into the busiest time of the year for apartment staff: the spring moving season. Even the leasing staff who don't handle maintenance problems are probably still working since it's the best time of the year to earn commissions, quarantine notwithstanding. Given incubation times, any illnesses they contract from working over the next two weeks will be affecting them later on down the line as everyone else goes back to work and the turnovers of newly vacant apartments start to increase.

I have no call to action here. I am not in a position to call for a universal improvement in the lot of the apartment maintenance technicians. Heck, I don't even know how our scenario compares to other companies across the country. But this week I do worry for my old friends and coworkers. Maybe this can spur some conversation between people about the challenges ahead for them. In times like these the invisible people of our culture become visible, and these folks deserve to be seen.