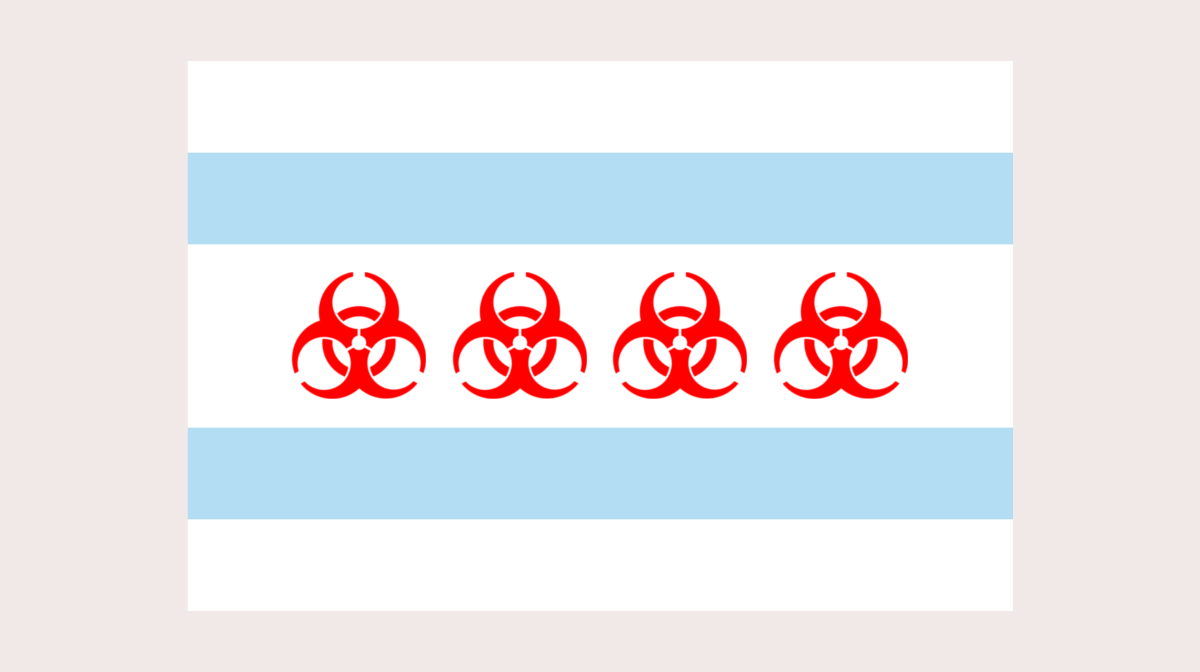 As Chicago residents head into another month of enforced thumb twiddling per the orders of the Governor, I am looking ahead and wondering how this event will shape the future of the city. As per usual, I turned to history for the answers.

There have been many epidemics that have shaped the development of modern civilization, from ancient diseases like smallpox and plague to modern ones like HIV and MERS. Today I'll be looking at five epidemics that had a lasting impact locally, from ones that changed our official boundaries to others that established less official borderlines between cultures.

As some know, early city engineers changed the direction of the Chicago River so that it now flows away from the lake. There is a myth that this occurred due to massive fatalities following an outbreak of cholera in 1885, but this myth is apparently untrue. However, there had been outbreaks of cholera and other waterborne diseases in decades prior that had caused large numbers of fatalities. What did happen in 1885 was a massive storm which caused a large amount of sewage to flow into the lake. City residents panicked over the potential for another cholera outbreak, and that panic pushed them to vote in support of the massive river project.

The city created the Sanitary District of Chicago to oversee the redirection project. Over time the Sanitary District evolved and changed its name, and is now known as the Metropolitan Water Reclamation District. Chicago voters will recognize the MWRD as one of the sections of the ballot that nobody thinks about until about 24 hours before it's time to vote.

But cholera didn't just affect the river, it also affected the entire layout of the city. Long, straight streets in a grid pattern meant easier channeling of water away from standing pools where bacteria could grow. The grid system wasn't only a matter of easy transportation. It was also a matter of public health.

On the border of Albany Park and North Park on the north side is a facility now known as North Park Village. It currently serves as a nature preserve and senior housing center, but at the beginning of the 20th century it was the Chicago Municipal Tuberculosis Sanitarium, the largest of its kind in the country. But this wasn't the only lasting effect of Tuberculosis within the city of Chicago.

TB played a huge role in the development of modern health codes, public housing and architecture. Many believed that open air and light were effective in curing and stopping the spread of the disease, and that dust was a prime hiding place for TB bacteria. Housing was designed for air flow and cross ventilation, with large semi-enclosed porches where the infected could spend their days in a constant flow of fresh air. Health inspectors and policymakers focused on minimizing overcrowding in low income housing, designing public housing projects with control of TB in mind. Many discussions that would evolve into matters of tenants' rights began as discussions about containing the spread of tuberculosis in tenement buildings.

Another outgrowth of the tuberculosis epidemic was the focus on green spaces and public parks. Detractors who criticized the close quarters of urban living pressed heavily to preserve areas where residents could get outside for some exercise and fresh air.

But the most lasting effect of TB in Chicago is our segregation. Neighborhood housing covenants that prevented the sale of property in white neighborhoods to immigrants and minorities were originally based on the premise that blacks were more susceptible to tuberculosis and had higher mortality rates in general. There's no doubt that this was merely an excuse based on logical fallacies which equated correlation with causation. But by presenting these discriminatory rules with a medical tint the authors managed to make their restrictions appear to be entirely objective.

The Century of Progress World's Fair of 1933 brought millions of people to Chicago. Some of them left with more than they bargained for. An outbreak of amebic dysentery affected tourists who stayed at the Congress Hotel and Annex near the fair grounds and was eventually traced to faulty plumbing which has most assuredly been fixed by now. 1700 fell ill and 98 died. As the outbreak was not discovered until many of the tourists had already returned home, it took a massive investigation to trace the disease back to the Congress. This medical forensics work paved the way for many similar investigations today.

While several city departments had partial responsibility for inspecting plumbing, none were directly charged with ensuring that it was kept in safe and working condition citywide. It would take another 26 years for the state of Illinois to come up with a plumbing code, but within the city of Chicago one Dr. Herman Bundesen led the charge to correct problems with old plumbing in many of the original buildings dating back to the first years of the city's existence.

Polio survivors along with World War II veterans were some of the biggest advocates for civic and architectural design created with disabilities in mind. The Architectural Barriers Act of 1968 was the first federal law pertaining to accessibility, mandating that all federally funded buildings must be accessible to people who use wheelchairs. While continued progress in the realm of accessibility has depended on decades of work by advocates for the disabled, if it hadn't been for the polio pandemic of the early 20th century it would probably have taken far longer for such laws to be enacted.

It is because of the precedent set by this law that we have such things as handicapped parking spaces and bathroom stalls, curb cuts at corners of the sidewalk and automatic sliding doors at the entries to grocery stores. While later laws such as the ADA have expanded protections to include other disabilities and other venues such as housing and employment, there is no doubt that the survivors of polio had a huge impact on the structure of modern buildings and cities.

Addiction has shaped modern Chicago in ways that few other epidemics have accomplished. Our government depends on our addictions to keep running. Taxes on legal addictions such as alcohol and cigarettes are some of the highest in the country. But our addictions to illegal substances keep a differents sort of hierarchy running, funding the gangs that are ripping apart many neighborhoods across the city and the cartels that supply them with weapons. Maybe if we stopped referring to it as addiction and gave it a fancy scientific name like "ADVID-47" it would merit a public response suitable to the scope of the problem instead of being shrugged off as an unavoidable guilty pleasure.

There's no doubt that COVID will have a lasting effect on Chicago. Looking at the history of the city's response to previous epidemics it's clear that these events can either drive us apart or become a lever to lift us up together. It remains to be seen which way we will lean as we start to emerge from our hidey holes through the remainder of the year.

Will we see the creation of quarantine enclaves for essential workers? Will we see a shift away from public transportation? Will the lure of the Loop be lessened as commercial interests lose interest in maintaining expensive office space leases downtown for their teleworking employees? Will communities start to evolve around grocery stores instead of around schools or train stations as they currently do? This city is known for its restaurants. How will Chicago's food industry respond to a new emerging population living with a damaged sense of smell?

How do you think the city will respond to COVID in the long term? What steps can we take now to ensure that our response is a positive one? Let me know in the comments!