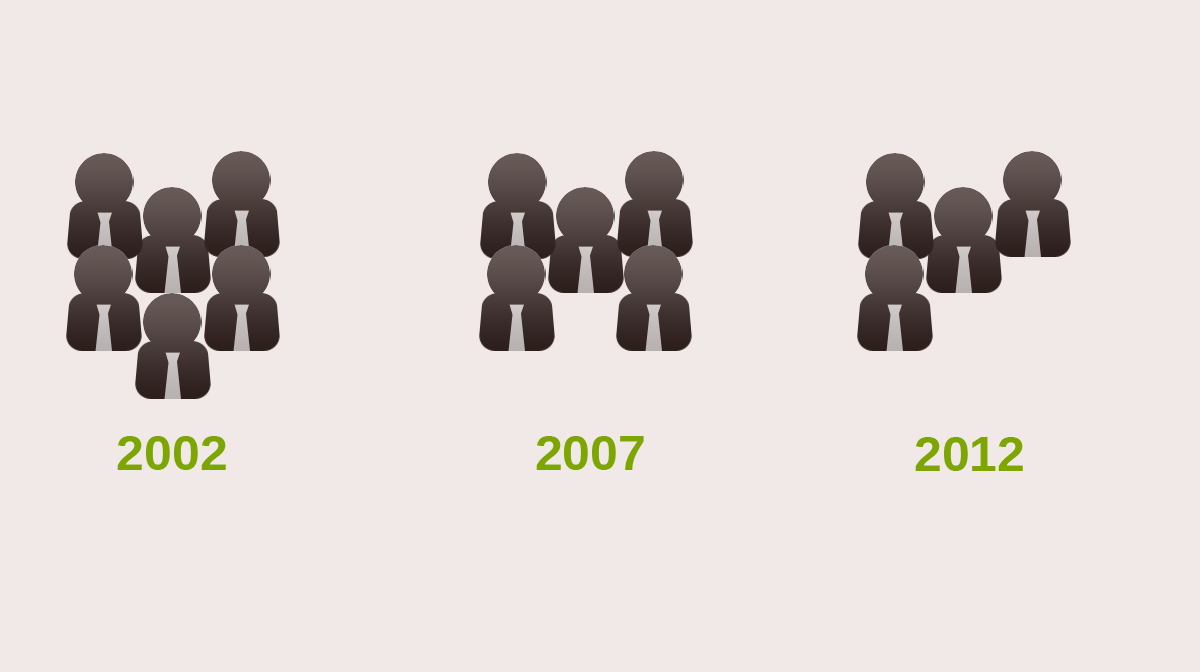 I've always wanted to get a handle on the demographics of Chicago landlords. I'm sure a lot of real estate agents, mortgage lenders and insurance salespersons would want to know them too. Unfortunately this is not the article where I'll provide those numbers, but I did manage to find one interesting tidbit: since 2002, Chicago has seen the landlord industry shrink at a rate nearly 3 times the national average. You'd better believe I want to know why.

The statistics available through the US Department of Labor's Bureau of Labor Services (BLS) can give us some insight into changes in the US landlord market over time. If you look at this chart showing the employees of "lessors of residential buildings, seasonally adjusted" and swap out the dates to run from, let's say, 2002 through 2016 you'll see a chart that looks like this:

Now that's one nasty ski jump of a trendline but it's not so bad when you realize that the chart bottoms out at the minimum value rather than at zero.

A close inspection shows that at its peak about 384,600 employees worked in the industry, dropping to 341,700 at its lowest in 2014. That's a loss of about 11.2% of the initial total. The employment in the industry only begins to tick up starting in 2014. Now, this doesn't include accidental landlords who rented out their old homes when they moved to a new one. It doesn't include investors who own shares on REITs as part of diversified portfolios. It's just employees of companies that are landlords as their central focus.

BLS cannot give us fine grain geographical insight, but we can find some information at the US Census Bureau's Economic surveys to help us get an idea of how Chicago fared during a similar time frame. The Census bureau has no information on employees working for landlords, but they do track the number of actual businesses in the industry, which is pretty much just as good. After all, you can't have employees without companies.

Here's what we find for the number of Chicago-local companies that called themselves "Lessors of apartment buildings" between 2002 and 2012:

This is an overall net loss of 30.5%, nearly three times the national loss shown by BLS. It naturally made me wonder why Chicago was losing so many more professional landlords than the rest of the country. I decided to go do some digging on various investor advice forums to see if I could find why so many left and why new ones weren't coming in to take their place.

I stopped by the following industry-specific sites in search of information:

I had wanted to include Multifamily Insiders in my research but their site has unfortunately been down every time I've tried to search it.

I spent about three hours looking around the sites above and found 30 posts complaining about Chicago.

For your amusement and/or horror here are some admittedly cherry-picked quotes.

"She will stay longer. I just terminated my own Section 8 tenants' lease. What you are experiencing is not unusual. It is typical Section 8 behavior. Soon, you will find that CHI is a terrible place to evict a tenant. She knows this, and is betting that you will not be able to evict her for several months." - Reddit, "How to get rid of a Section 8 tenant"

"I bet it comes with a bullet proof vest and a comfort pit [bull]!!" - MrLandlord, "Cheap deal in Chicago"

"Worst part about Cook County is that the landlord has to appear (or is very 'encouraged' to appear). So not only am I paying an attorney a grand, I'm chewing up an entire half day of my time too. Oh, btw, the one eviction I had, I ended up going to court 3 times. PLUS, I got a ticket at the court house that day as well (my sticker had expired). Just throwing salt in the wound. […] But yes, I will never buy another property in Cook County again." - BiggerPockets, "The Most Landlord-Friendly States"

"Have you checked into the average time to Eviction in Cook County and in Chicago? That was enough to keep me out of Cook County altogether." - BiggerPockets, "Best Area in Chicago to Purchase Rental Property"

"Chicago is one of the most unfriendly cities to have rental property in. You cannot evict people in the winter, and even normally it takes 2-3 months to evict people. Taxes in Chicago are insane on rental property. You will need to figure in the cost to have a professional do you books and file your taxes with the Chicago/Crook County/Illinois/Feds." - Reddit, "Investing in Multifamily Property in Chicago"

"IL is a state where we have people known as 'professional tenants': they pay first and last month's rent, and never pay again. It can take two years or more to get them out under IL law." - BiggerPockets, "Typical Eviction Time Frames for Chicago"

I recently wrote in our monthly newsletter that some of the gentrification problems facing Chicago right now could be solved by focusing on improving our reputation within the investor community, rather than by current efforts to repeal the statewide ban on rent control. This suggestion bears up when you look at the central reason given by landlords who are in favor of Chicago as a good city for landlords. Chicago's economy is on par with New York, Los Angeles and San Francisco, but our housing costs are far lower. This means that there is a big potential for growth, which landlords like to see - it means that they can sell buildings for much more than they buy them for given time and effort. However, in order for them to see this profit they have to drive prices up from our current level to that of those other cities quickly.

Given the cost of ownership in Chicago, many of the potential landlords I saw seeking advice in my searches were flippers looking to buy, renovate and quickly sell within a few years. These are not the type of investors who buy property and sit on it for decades waiting for slow appreciation. The potential investors in Chicago apartment buildings who survive the onslaught of complaints about the city and still buy in want rapid results.

There's no doubt that some of the lost Chicago-native landlords were probably replaced with outside investors. Even if they're a long term investor, if they're from out of town they won't have the same ties to a neighborhood and its character. They will not be personally affected by forcing out long-term low income residents from their building.

Surprisingly, the crime rate surfaced the least among all of the complaints, but its prevalence among complaints from outsiders gives us another idea of why they're gentrifying - if all you see when you look at Chicago is a crime ridden slum, you might see yourself as a hero when you increase prices and get low income residents to move out.

Of course, it would be better for all of us if the crime rate went down in Chicago, but in terms of slowing gentrification it's a minor concern - in fact, lower crime rates might cause an influx of upper class newcomers to the city, accelerating gentrification. Given concerns over cost of ownership, adding rent control will do nothing to attract long-term owners - if anything it will scare even more of them away. Besides, given the pace of the city administration and the many other pressing issues on its desk, even if rent control were introduced to Chicago right now we would probably still lose current battleground neighborhoods to gentrification long before the city could draft rent control laws, enact them and enforce them.

If Chicago wants to stem the tide of gentrification in developing neighborhoods, it needs to focus on shortening eviction times, lowering ownership costs, providing incentives to local and long-term owners and cracking down on repeat offenders going through housing court. It also should consider making a dedicated effort to encourage locals to take on the task of being landlords.