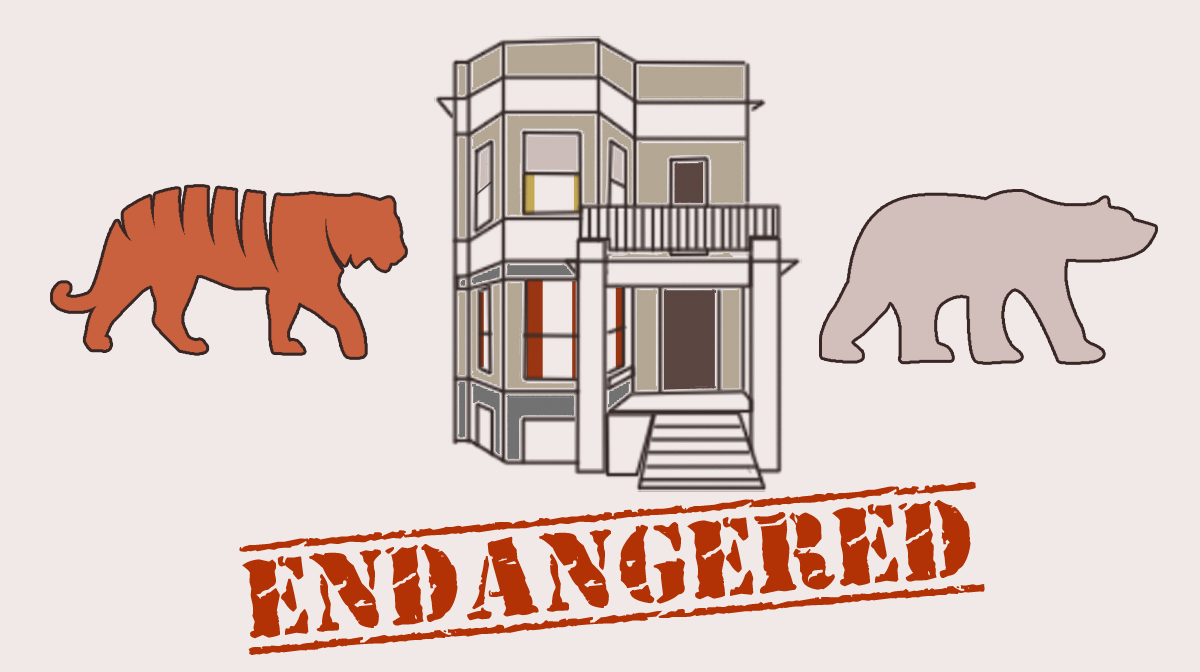 This week the venerable Institute for Housing Studies at DePaul University released its 2017 edition of their equally venerable "State of Rental Housing in Cook County." In addition they posted a call to action on their blog stating that "The Beloved Chicago Two-Flat Is In Distress." This article joins a veritable anthology of articles about the dwindling number of two-flats, including WBEZ CuriousCity's analysis from 2014, Whet Moser's take on it from last month's Chicago Magazine and Dennis Rodkin's 2015 discussion of the problem from Crain's Chicago Business.

IHS, WBEZ and Chicago Mag all agree that the disappearance of two-flats is having a negative impact on the amount of affordable housing, although the Crain's article takes a more benign view on the matter. About 6000 of these buildings disappeared each year from 2012-2015. Some were torn down and replaced with single family homes, others were converted to single family homes. In most cases the loss of these buildings meant an overall loss in housing density - it's rare to see a two-flat replaced with a larger building.

Most of these articles trot out the same main causes for the downfall of the two flat. They're old buildings that require a lot of upkeep that costs too much for their working class owners. They saw a lot of foreclosures during the subprime mortgage crisis. Zoning laws in the city favor the construction of single family properties rather than multi-unit buildings. NIMBY residents protest the construction of high density rental. All of these reasons are certainly contributing factors. However, one additional factor is not really mentioned, and I think it has a pretty substantial impact on the disappearance of the two-flat. Perhaps this is because none of the authors spent time as a rental-focused Realtor in a modern Chicago brokerage.

Commercial agents work in the "STEM" side of real estate, handling offices, industrial, retail and large scale multifamily housing. They work with buyers and sellers who view real estate as an investment commodity. They are not required to be Realtors. They generally do not interact with the MLS. They are trained in things like ROI, valuation and dividends. They work in huge teams. I would only recommend working in commercial brokerage if you have a masters degree in finance or real estate, not to mention several industry-specific certifications such as CCIM.

In contrast, residential agents work the "liberal arts" side of the industry, handling houses, condos, townhomes and small apartment buildings. They are for the most part required to join the Realtor Association so that they can post their listings on the MLS. They are trained in buyer psychology, home staging and fair housing. They know when to call a building a "house" and when to call it a "home." Most work alone, although small teams have been on the rise in some residential brokerages. Pretty much any extrovert with a high school diploma and a drivers license can do reasonably well in residential real estate.

While there are some very capable residential agents who have very strong commercial transaction skills, your average residential Realtor is not interested in working with investors. They aren't trained in how to pitch a property in a way that attracts investors. If they were capable of doing the mental math required to deal with investors they would be either doing commercial real estate outright or working in a more stable industry. An agent that's very successful in working with home buyers and home sellers will not necessarily have the all-business demeanor necessary to work with investors. At most they will work with developers to purchase homes pre-conversion and then resell the result after work is completed.

I attended a continuing education elective class on multifamily valuation for investors a few years ago as part of my license renewal process. There were very few students. Half of them were commercial agents. The other half were investors. I was the only residential agent present. In my former real estate office, out of roughly 40 agents there were only three who included small apartment buildings in their business model. Two of them were on the verge of retirement. By contrast we had a huge number of agents with the softer "specialties" such as senior housing, foreclosures, green construction and relocation.

While I was working at the old office I was brought in as a location consultant on some land value analysis for a suburban commercial broker. He had a client that was looking to purchase a block of two-flats to tear down and replace with a strip mall. My boss felt I was the only agent in the office who could "speak commercial." The project required such a complete shift in mindset that I could only work on it for a few dedicated hours per week at the end of the day.

If you only know how to use a hammer, you will use that hammer even when a screwdriver might be the more useful tool. Likewise, if you're a residential Realtor focusing on residential clients you will see every property as a possible single family home.

When foreclosures and low property values started hitting 2-4 unit buildings in 2010, they entered an inventory pool used by residential Realtors. Those Realtors worked with buyers who were looking for low-cost housing in a buyers market with very few other good types of housing to choose from. Many condo associations were troubled at the time. Single family owners were holding on to their underwater homes until the market recovered. We were emerging from the condo conversion era when everything from warehouses to hospitals to churches were repurposed for residential use. If those agents wanted to sell something to their clients they had to get "creative" with 2-4 flat buildings.

Meanwhile, the landlords who would normally buy 2-4 flat buildings in Chicago were avoiding it in droves. Those who could get financing to buy multifamily were working with commercial brokers. Residential agents had no incentive to pursue investors who might have preserved the two-flats as rentals. In fact, there was nothing in the residential industry - no broker training, no company incentives, and no hiring focus - to encourage Realtors to see 2-4 flat listings as anything other than potential fodder for their residential clients.

Instead of doing the extra training and business development needed to market these buildings to landlords, they went for the low hanging fruit. The strengthened already existing bonds with contractors and architects, encouraging the conversion of two-flats to single family homes to suit the needs of their existing clients. The result? 24,457 two-flats lost in four years, many of them in low-income neighborhoods where this sort of rental housing is desperately needed.

The large scale changes to Chicago's zoning practices that would be needed to save the two-flat are unlikely to occur in time to have an effect. Equally unlikely is a shift in attitudes that would make it taboo to convert low-income multifamily buildings to single family homes, at least as long as HGTV continues to pump dreams of central AC and crown moldings into the heads of the nation's buyers. But three possible shifts within the real estate industry could prevent Realtors from making the problem worse.

The first option would be to train Realtors on how to work with investors. Residential agents have been beating the drum that it's good for everyone to buy a home for years now. This die-hard dedication to the impossible ideal of the American Dream had a huge effect on our nation's recovery from the housing bubble. Imagine the effect that an equivalent campaign encouraging small private landlords to invest in Chicago would have. It can't happen with the current system of training residential agents. It can't happen as long as huge brokerages based outside of Chicago are dominating the city, given its peculiar landlord-tenant laws. But it could happen. Given the age of the few agents in my old office who focused on 2-4 flats and the age of the investors who still own them, there is evidence that such a focus did exist, albeit several decades ago.

However, given the stained history of Chicago Realtors vis-a-vis rentals, this may not be the best idea.

Another option would be to take 2-4 unit buildings away from residential agents and give them to the commercial brokerages instead. This would require for the most part a simple removal of these properties from the MLS. Those few residential agents who actually treat 2-4 unit buildings as investment properties could move over to the commercial side and all would be well. However, the current focus of commercial brokerage is on corporate clients, not the small private landlords who have traditionally used Chicago's two-flats as both a home and an income source. I doubt that commercial brokers would be interested in expanding into a less lucrative area of the market.

The two-flat in Chicago lives in limbo. It's exempted from the CRLTO as long as the landlord lives on site. It's a triple purpose property, existing at the same time as a rental, a home and a business. The multi-use buildings with storefronts below and apartments above that line our arterial streets may approach the versatility of the two-flat but even they don't have the same same level of architectural chameleonic schizophrenia. A uniquely Chicago building set apart by law and usage requires a uniquely Chicago industry to handle its sale.

It's my opinion that we need to see 2-4 flats given their own division of the industry with its own lobbyists and PR. Bundling multi-use property with them might solve our empty storefront problem, too. We need real estate companies that focus on these hybrid buildings. It would take a combination of expertise in investing, renovation and rental. It would require a staff with an activist approach to real estate. But it could happen, and I think it needs to happen if the two-flat is to be saved.