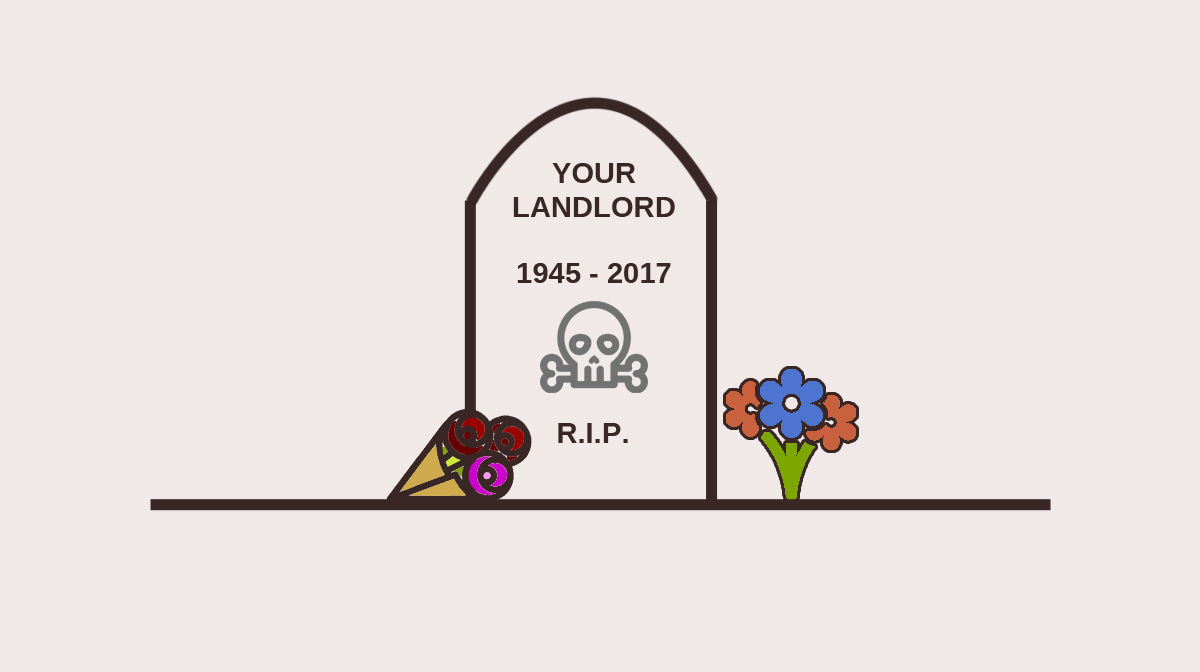 In response to last week's article about lease clauses, someone said to me, "Oh, I don't need to worry about reading all that, I just go month to month verbal with my landlord!" Now, I know that there are many areas of the US and the world where verbal agreements for rental are standard practice, but I've got something to share with you today that may change your mind about them.

On April 10, 2013 I published an article in my old real estate blog that I'd intended to be a puff piece. It was a quickly written, relatively superficial post intended to meet a deadline while I worked on a bigger research project in the background. It turned out to be one of my most popular posts, with 90 comments to date. It's called "What Happens If Your Landlord Dies?"

The comment section on that post is an anthology of tragedy. Most of the stories in the comments all have a second common thread besides deceased landlords: the complete absence of a paper trail. To prove my point about written leases, I'm going to let them do the talking for me. (Note: quotes have been edited for grammar & spelling and certain sections have been bolded.)

"My landlord died but he's also my boss! So the lawyer has taken over now and he gave me like 4 days to move out its been like 7 and I haven’t yet. I don’t have a written lease just verbal and I was paying weekly! So now I have no job no $$ to get a new place and they’re kicking me out. Is this legal? Should I just listen to him and be homeless & jobless?" - July 2014

"My landlord passed away. In his will he left the places he owned to his girlfriend. Well she wrote the will in her hand writing and he signed. Meaning the will is no good. And now his places are in probate between his children and his girlfriend. We have lived here for 2 yrs and are current on our rent. [...] Mind you our lease has been up for a year now. She was angry for us needing things done. What do we do?" - September 2014

"My 88 year old mother's landlord passed away. My mom was taking care of her and had a reduction in rent. My mom lived there for over 10 years, with no lease. Lawyers wrote a letter saying she has 30 days to move or have to pay $3000 a month. What can she do?" - October 2014

"My landlord was also my grandfather (father to my deceased mother). We never had a lease, just a verbal contract. He died last month, I heard the property is going to an estate run by my greedy aunt. My uncle thinks he should run the estate. My mother should have run the estate if she were still alive. Since I am family, do I need to continue to pay rent? Not sure what to do. Any advise would be helpful." - November 2014

"I am a month to month renter of a room in a friend’s home that has no lease or written agreements. I’ve had the misfortune to have witnessed the untimely death of my friend who also happened to be paying a mortgage on the property we lived on. I rent a room. It seems he had no Will and his brother, now the executor, seems to have taken no interest in property or even to step foot on the property. He had even went as far as to tell me I could take my friends vehicle if I can obtain the title! Yikes." - April 2015

"Had a verbal agreement with Landlord for almost 10 years now. [...] Good guy, everything was fine. He passed away and now his wife wanted us out. So we move. We clean up the entire house, mop it and everything. We keep the grass cut, etc.

There was mold issues that we had told him about, verbally, but nothing had been done. Water was getting under a door in a side-room of the house. Now the landlord’s widow, who is very old and senile, is demanding thousands of dollars to take down walls and put in new flooring.

She says she’s suing us, and she’s filthy rich. We can’t afford a lawyer, and we’re kinda freaking out. Any advise?" - May 2015

"I have a friend that has been living in a house for 3 years without a written lease & his landlord died. Can the executor of the will evict my friend before the will is finalized?" - July 2015

"My landlord (private owner) died without a Will. 5 Children are feuding about the house. An attorney is involved. I know for a fact that the house has recently been refinanced. So what do I do ? Who do I pay? Oh and the landlord was not business oriented at all. No lease agreement kept, nor receipts."

"What if the Landlord dies one day before the sewer pipe collapses and is in dire need of repairs? I cannot pay it and submit receipts to the estate. It could be a $10,000 job!

We had a written lease the first year. Since then (5 years since,) we have been month to month requiring 30 days notice. Can we leave early due to the sewage issue? [...] He’s died on Feb 4 but I only know that because I saw his obit." - February 2016

"My landlord passed away last month, he lived downstairs while I rented upstairs. I have been here for 2 years, my 1st year I had a lease. The 2nd year we had a verbal agreement. He had a reverse mortgage on this property, and at the time of his passing he had no will. I do want to move and find another place but can you tell me how much time I have." - April 2016

"My landlord is in ICU dying. He and I were close friends. He was very kind to me and basically let me live rent free for about two years. I would do many odd jobs for him and he would knock money off rent and things like that. He never questioned me about back rent or money owed and really showed no concern to the present day.

Now his family has apparently taken over. I noticed them taking my things out of the house. When I asked for my things back they refused and then grilled me about their interpretation of his records on my five years renting with him and how two years was not paid. They said attorney has control and once they go through his records they will determine what I still owe, because they want it. So I was wondering if there’s anything I can do, because I they took a flat screen TV, two vintage guitars, and a leaf blower and lawnmower I'd loaned to him. They won’t give it back unless I have receipts but I don’t have receipts for the stuff." - May 2016

"I rent a building for my small business. The Landlord recently died and there was no written lease agreement. My family has been here for 38 years. The landlord had 2 children and no will. I have been paying the rent to one sibling and the other has came to me and says they want half of the rent. The first sibling is not in agreement with this. Which one should I be paying the rent to or should I split it between them?" - February 2017

"I have been fixing a property that I was promised to be able to live in because landlord has no use for it. He lives in another state with his wife. About 6 months ago the passed away and I just found out. They have no next of kin that is why he wanted my family and I to live and fix the home for ourselves. I have no paperwork on our arrangement so what can I do? I don’t want to lose the home." - June 2017

So what do we learn from this? The most important thing you can do to protect yourself as a renter is to keep a paper trail. Have a written, fixed term lease. Make sure it's renewed when it expires. Get receipts for every rent payment. Keep those receipts until you move out. People die. Landlords die. They may have a will, they may not. They may have good children with whom they communicate on a regular basis, or greedy children with whom they haven't spoken in years. Landlord death isn't a matter of "what if," but of "when." They don't even have to be elderly for it to happen.

Even those of you living in buildings with big corporate property managers where landlord death is less of an issue still need to keep that paper trail. Computers fail. Offices can catch fire. Landlords hire and fire property managers regularly, and transfer of records from old company to new can be spotty at best.

Yes, it's a little more work to keep track of your lease and get receipts for your payments, but when the time comes that you need those documents you will be so very glad you've made the extra effort. If your landlord puts up a fuss about writing things down, point them to this article and ask them, "what happens to me if something bad happens to you?"