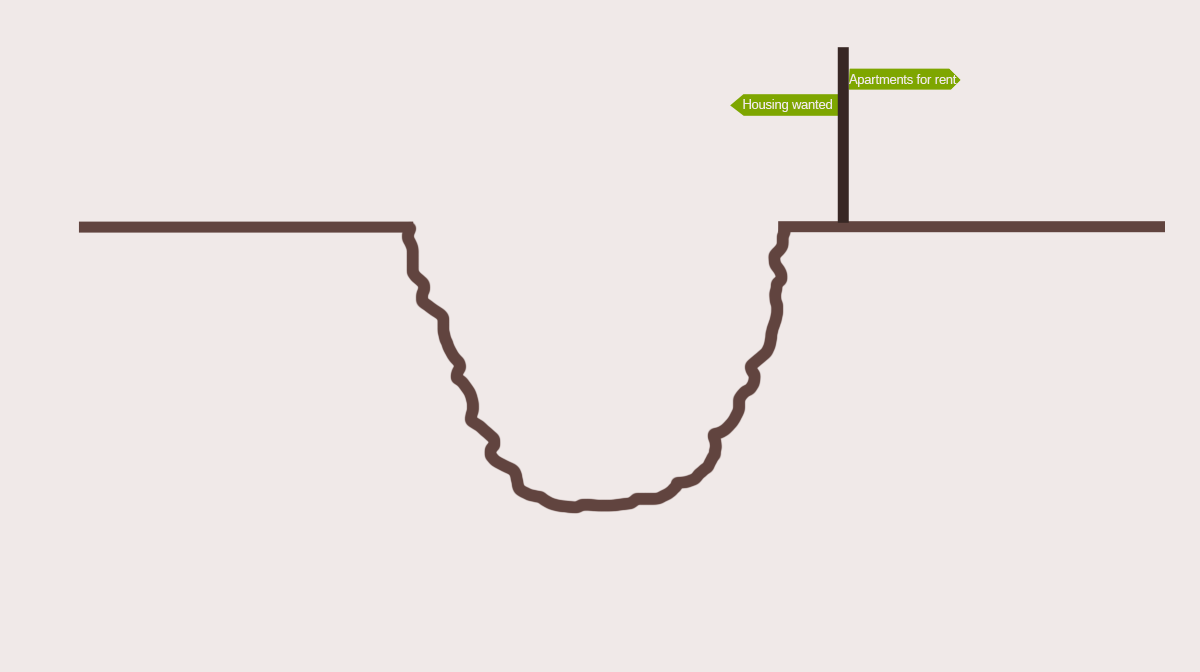 Buried deep within the bowels of Craigslist lies a little-visited section called "Housing Wanted." You might think that it's an ideal sort of situation. Tenants post the specifics of their perfect apartment and landlords come to them. In some sections of the world where there's a lot more rental housing than there are renters this is actually the case. In Chicago it is the pit of despair. It's where tenants who cannot find housing through any other means wind up when they've exhausted all other options, along with a few newcomers who remain unaware about how Chicago rental market works. In contrast to the very busy "apartments for rent" section which sees about 2000 new posts a day, the Housing Wanted section gets about 10-20 posts per day, many of them miscategorized.

The authors of the posts in "apartments wanted" have usually been turned down for several apartments already. Faced with repeated rejections many of them will put in their postings the reasons why they have been unsuccessful thus far. An analysis of this section will give us a pretty clear idea of what it takes to completely fail an apartment hunt. And I do mean fail - if you are posting here you will not find housing until you change either yourself or your search criteria.

When I worked in leasing for a local landlord I was certainly aware of this section of Craigslist and would occasionally visit it if I had a "dump listing" that I wouldn't be able to fill any other way. Most of the time I would take a look at the postings, sadly shake my head and opt to keep the place vacant for another month instead. There would be no way I'd be able to convince my supervisors to approve them. We would lose less money in doing so than I would in evicting any of the individuals I found there.

Recently I've returned to the Chicago version of Craigslist's Housing Wanted - in this case, the subsection called "Apartments Wanted" which theoretically eliminates people who are looking for roommates, sublets, sex in exchange for rent, or parking spaces. I pulled 40 posts from across several weeks of visits to get an overview of who's still using this little known backwater of despair and tragedy, and have both some interesting general numbers and some highlights to review with you, along with some recommendations to avoid winding up in the pit of despair yourself.

I know that 40 posts is not a lot for establishing a solid sample size. Time constraints are a thing though, and I should note that I did go through many, many miscategorized posts to find these 40. Excuses aside though, please do not use these numbers for any sort of statistical analysis. They are a snapshot of who was using this section of Craigslist during this particular month.

North Side is the Best Side. Only 5 out of 40 postings mentioned any south side neighborhoods. The south side neighborhoods mentioned were UIC, Little Village, Hegewisch, South Loop and Auburn-Gresham. That last one was a social worker posting on behalf of their clients. Several were looking for trendy neighborhoods on the north side - Logan Square, Avondale, Lakeview, Ravenswood. Families with kids were invariably looking for something on the far Northwest side along the Blue line, where rentals are few and public schools are excellent. 9 postings only said "city of Chicago" with no further details. 3 were looking in nearby suburbs even though I had filtered the listings to include only those posted in the city proper.

What's Your Budget? Low income, or at least low budgets, are the thread that hold together pretty much every person posting in the Apartments Wanted section. This probably comes as a surprise to nobody. 29 out of 40 postings specified an ideal rent rate, plus one additional post that offered to work as a handyman in exchange for 50% off list price. I compared these ideal rents with the HUD Fair Market Rents for the individuals' neighborhoods of choice. In most cases the requested rates were at most 88% of the current asking prices. Six postings had budgets at less than 60% of the fair market rent for their specified zip code. Bear in mind that HUD's fair market rents tend to be on the low side.

They're Good Dogs, Brent. 8 postings mentioned dogs, an additional two had cats, two had both a dog and a cat, and one had some sort of terrarium based pet, species unspecified. (Any landlord reading that will assume it is a snake.) There were not only renters with dogs, but renters who started their postings using photos of their dogs. Dog-friendly apartments in Chicago are usually in the worst condition of any on the market. This is because they are scarce. They fill so quickly that landlords do not have to do much to make them look pretty. If you want rental housing and you have a dog, you need to be prepared to fight for it.

TMI. Several of the ads provided only one or two sentences. They don't specify a neighborhood, budget, number of bedrooms, move in date, number of people. A landlord reading these ads needs to be persuaded to call you instead of one of the many other tenants they have to pick from. They do not have time to waste calling you to drag all of that information out of you. Authors need to try to put all the important details in their postings.

Others provide too much information, which is sort of the equivalent of using your police mugshot in your Tinder profile. They complain about how their last landlord jacked up the rents. They post diatribes about how they have been getting calls from a bunch of "stupid people who can't read." They talk about how they are a "Caucasian, Catholic family" who wants an upper level apartment without any smokers in the building and space for their auntie from Dublin who visits every two months. They include stories about how they were held up at gunpoint two years ago which led to them getting evicted. They state that they want a perfect Lakeview high rise condo with a balcony that isn't going to be sold out from under them in 6 months. They mention that they need to move "immediately" - in other words, they're about to be evicted from their current apartment.

Your audience in the Housing Wanted section is going to mostly consist of a) scammers, b) perverts, c) newbie rental agents and d) landlords with shoddy apartments that nobody wants to rent. If you actually want to find success in this section of Craigslist your best hope is to impress the folks in Group D. And while I'm on the subject...

Balcony on the side, please. There were a lot of picky postings. Renters looking for balconies, free parking, single family homes with garages, live/work storefronts, private entrances. Apartments like that go to the tenants who are willing to call landlords, pound the pavement and chase down their housing. For every item on your list of housing wants, you need to add about a week to your planned apartment hunting process. Slim down your list and do the work.

Fear of Commitment. 7 of the postings mentioned that they're looking for short term rentals. Several of them wanted furnished short term rentals. At 88% or less of fair market rents. Not going to happen. The ads did not mention subleases. They were looking for legitimate leases lasting anywhere from one to seven months. Now, a landlord's highest costs come from turnovers. Chances are they will spend at least the equivalent of two month's rent to clean up after the last people and put you in there. If they had to evict the last tenants that probably cost them at least half a year's rent. You need to stay for at least that long for them to break even. Also bear in mind that if you leave any time after September 1 you are sticking them with a vacancy that will last until spring.

Never say that you're looking for a short term lease. Never ask for month-to-month. Ask for the year and break it later if you have to. And do not mention that you want a furnished apartment unless you also say that you're willing to pay a surcharge of at least 33% over the list price to use the landlord's furniture.

They're Good ... Kids, Brent? I saw lots of posts from single moms and families of 4 or 5 trying to cram into two bedroom apartments. Landlords tend to lump families in with dog owners as destructive and unwelcome. However, while landlords can reject dog owners, when it comes to families they are technically required to follow the Keating Memo. If you approach them and ask for a showing they cannot turn you down. That doesn't mean they will go out of their way to invite a family with children into their property by plucking them out of the Housing Wanted section.

FICO Foibles. 11 postings mentioned bad credit. An additional 5 were either on Section 8 or disability. It will take one of two things to make landlords stop rejecting tenants in these situations. Either the financial and time burdens of eviction need to be lowered drastically or an ordinance needs to go on the city books prohibiting landlords from declining tenants based on credit history. Until then it's 670 or bust.

English is not their strong suit. Malformed sentences. Missing punctuation. Abundant misspellings. Postings written entirely in other languages. There is a current sentiment in progressive circles that grammar and etiquette are racist, sexist, and/or classist. That may be so but you still need to be able to communicate clearly without sounding like a caveman. I worry when reading these postings that the authors would not be able to understand the complex legal language of a lease. In the best case you'll come off as lazy. In worse cases you'll appear uneducated or new to the country, neither of which are appealing to the landlord who wants to be sure you can maintain a steady stream of income.

It's rare to see quite such a collection of reasons why people cannot accomplish a certain common task, written in their own words, assembled in a public location. As the spring season rolls along, renters who are struggling to find housing need to keep these folks in mind as examples of what not to do, and adjust their own search practices accordingly. If you find yourself facing similar challenges, you may need to accept that this is not your year to find independent housing, and instead turn to family and friends to find a place to live.

One thought on “Patrolling the Pit of Despair: Craigslist’s “Apartments Wanted” Section”