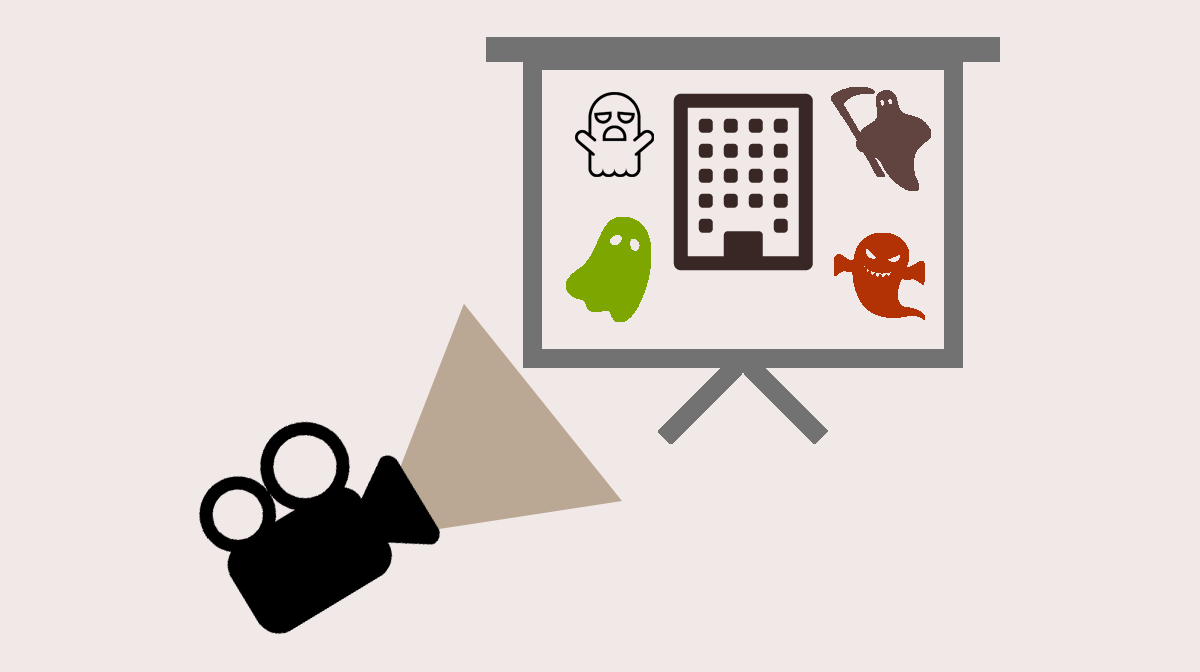 If you're faint of heart or under the age of 18, this article might not be for you. Otherwise, stay tuned for a lineup fit for a Halloween movie marathon.

Apartments are a great setting for horror movies. Close quarters, weird neighbors and unknown previous occupants who may or may not have died horribly are all excellent components in a good scary movie. In honor of Halloween, here are some of our favorite ghost films and creep fests where apartments and apartment life play a major role.

10. The Sentinel. With a fantastic cast (including Ava Gardner, Burgess Meredith, Jeff Goldblum and Christopher Walken) and a cool concept, this Brooklyn-based 1977 movie has a lot going for it. High strung heroine, an apartment building that's hosting a horde of demons, and a bunch of creepy satanic priests should have made for an awesome creepfest. Some call it a half-hearted knockoff of "Rosemary's Baby," but as far as apartment-based horror goes, it's still pretty fun.

9. Dark Water. Both the 2002 Japanese version and the 2005 US remake are good, but we lean a little towards the original. A small ceiling leak in a run down apartment leads a mother and daughter into a creepy investigation involving abandoned children, Hello Kitty, drownings, and a lot of really nasty water. Renters will definitely want to give their landlord a call after watching this one and get that little spot on the ceiling taken care of. Permanently.

8. Dream Home. This bloody Hong Kong movie features a lady slasher who snaps when she is denied the apartment of her choice. Eviction, gentrification and an obsession with landing the perfect apartment all combine in a murder frenzy, where our anti-heroine wipes out most of the tenants in an apartment building with their own kitchen appliances. While this film focuses on buying apartments - condos in the US - anyone who has been through a particularly tough search for housing will cheer. Everyone else may end up feeling a little queasy from all the gore.

7. Troll. Two decades before J.K. Rowling created her magical hero, another Harry Potter was a hero in the fantasy horror movie "Troll." Totally unrelated to the awful sequel that followed, Troll is set in a San Francisco apartment building where the tenants are being transformed into goblins and fairies by an evil wizard intent on taking over the world. A good flick for the horror lightweights in the crowd along with those who've been searching for a new and exciting way to redecorate the basement.

6. [REC] / Quarantine. You know the fur is going to fly when the medical staff of the movies heroes includes a veterinarian. The Spanish film "[REC]" and its American remake "Quarantine" find a motley group of newscasters and firemen trapped in an apartment building where the tenants are infected with mutant demon rabies. If you're one of the many renters who think that guy on the top floor is a lunatic and your neighbors are zombies, this is the Halloween flick for you.

5. Sleep Tight / The Owner. A sadistic maintenance worker goes out of his way to scare the heck out of the happiest renter in the building. The Spanish film "The Owner" (El proprietario) and its 2011 more commercial remake "Sleep Tight" (Mientras duermes) from the same director as [REC] will make you feel a lot better about landlords who won't take care of your repair requests.

4. Candyman. Chicago-based? Check. Apartments at their worst? Check. Urban legends come alive? Check. Elements of historic racial conflicts? Check. Bees? Definitely check. "Candyman," made in 1992 and set in the former Cabrini-Green housing project, was one of the last in the lineage of the 1980's celebrity villain horror movie trend. Unlike the initially quiet campground of "Friday the 13th" and suburban setting of "Nightmare on Elm Street," Candyman keeps the scare volume high from start to finish by dropping us into one of the most violent and frightening urban landscapes of the late 20th century United States.

3. Rosemary's Baby. This is the second of 3 horror films in Roman Polanski's "Apartment Trilogy," and probably the best of the three. The thought of who lived in your home before you is always something floating in the back of your mind as a renter. Rosemary's Baby taps into the utter lack of control a renter has over their predecessors and their neighbors. Regardless of what you think of Polanski himself, the movie is a classic and one of the best examples of 1960's horror.

2. Child's Play. Our top two films on this list feature not only apartments, but Chicago apartments as central settings. The 1988 movie  Child's Play features quite a few location shots of the city, and was supposedly set in an apartment building at Diversey and Pine Grove in an apartment building that still stands today. A possessed toy, voodoo, a potentially murderous six year old and the perpetually creepy Brad Dourif combine to make this slasher movie a classic example of 80's cheeseball horror that hold up pretty well nearly 30 years later.

1. Stir of Echoes. We're a Chicago company. Our work focuses on Chicago apartments. Of course our top choice would be this Chicago-based ghost story from 1999, filmed on location with Kevin Bacon and an army of local acting talent. It was overshadowed in the year of its release by The Sixth Sense and The Blair Witch Project, but we'll always set a bowl of popcorn aside for the home team. You can find the actual 3 flat from the movie on the 3600 block of West George St.

Delicatessen. It's weird. It's post-apocalyptic. It features that rare beast - a landlord who will go to any lengths to keep his tenants happy. But this French film about trying to maintain normalcy after the end of the world is more quirky than scary.

Rear Window. No denying that "Rear Window" is a classic thriller. Hitchcock manages to throw in a relatively thoughtful exploration of what we do when we think nobody's watching, and what it means to be a good neighbor in the city, all while freaking us out as we watch Jimmy Stewart come unglued. However, we feel that the focus is on the close proximity of city living rather than specifically on apartments.

Shivers (aka They Came From Within). Six years before HIV turned sex into a fatal nightmare for real, David Cronenberg directed the very adult horror film Shivers, set in a "modern" apartment building. The 70s renters take their swinging way too seriously as they're rapidly infected by a fatal aphrodisiac parasite. This low budget freaky movie is a riot of hilariously dated 70s style - we particularly love the old-school rental agent - but definitely not one for the kids.

Did we miss your favorite? Tell us about it and we'll get the popcorn ready!