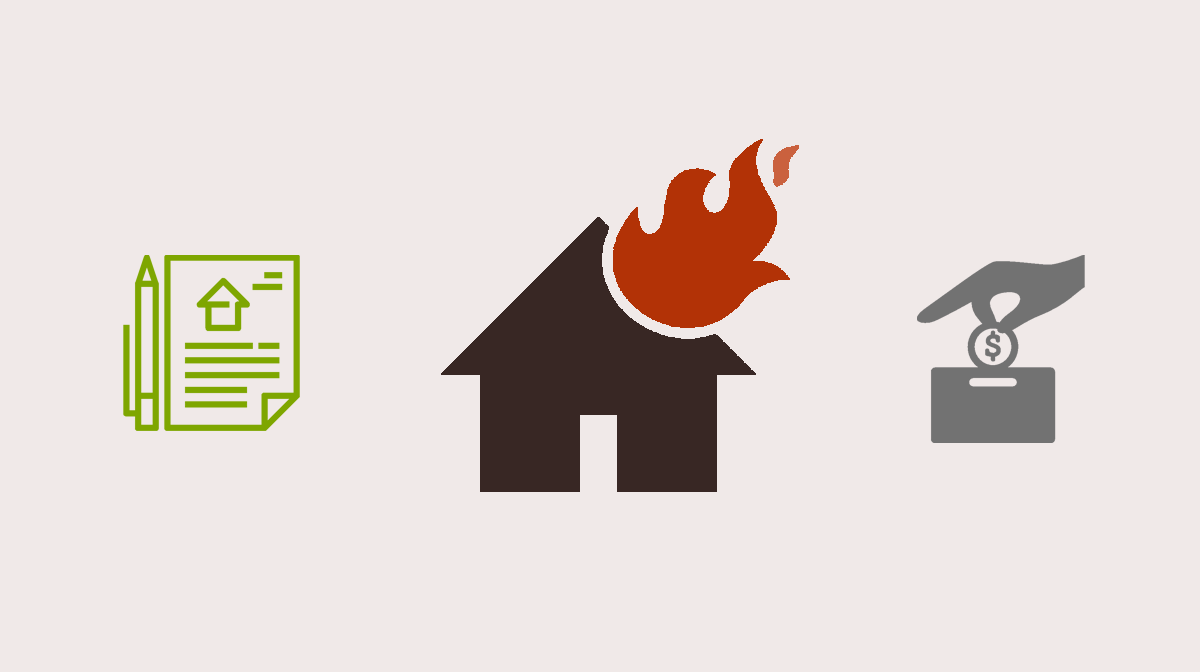 Content Warning: This article may be upsetting to those who have lived through apartment or home catastrophes.
Editor's Note: The quotes included in this article have been included without alteration from their respective campaigns. We have chosen to leave spelling, grammar and profanity intact out of respect for the victims.

“The couple did NOT have renters insurance. They literally lost EVERYTHING, Car keys, drivers lisence, credit cards all personal items gone. They had $100 on the dresser and ran without thinking of grabbing it. Can you imagine loosing items that was your grandmothers, your family items to be passed down for generations to come? ALL GONE.” - https://www.gofundme.com/jeffshannonfire

Renters insurance exists to help you recover your lost and damaged items after major apartment catastrophes like fires, floods and hurricanes. Savvy renters know that renters insurance should be on their list of things to obtain immediately upon signing a lease. It Some landlords have started to require proof of insurance. It's relatively inexpensive – according to the Insurance Information Institute (iii.org), the average cost of renters insurance in Illinois was $172 per year in 2013. Even so, III estimated that only 37% of US renters had renters insurance in 2014.

Lately those who find themselves struggling to recover from major catastrophes have turned to crowdfunding site GoFundMe to help solicit cash from friends and family. We decided to turn to GoFundMe to see what sort of impact apartment fires had on those with and without apartment insurance.

“As being a Firefighter my first instinct was to get everyone out of the building an give dispatch a size up. I was unable to put the fire out due to be overwhelmed by the smoke. This fire put my mom, girlfriend an the little munchkin an myself out, we lost everything in the fire. The smoke detectors never went off, I'm the type that never asks for help, We didnt have Renters Insurance due to changing insurance back in feburuary...” - https://www.gofundme.com/27rj8fjc

On August 18 2016, we captured and surveyed the first 100 of the 678 GoFundMe campaigns that came up with the search terms “apartment fire insurance.” For each campaign, we noted the amount requested, the amount received, the start date, percent of donation goal obtained, and, for applicable date that the donation goal was reached. Where available, we also noted the occupations of the victims, the number of children and pets, the number of fatalities, and the cause of the fire.

Our sample size means that we're 95% confident that our results will reflect the general population, with a 9% margin of error. That isn't fantastic but we really couldn't stomach reading any more stories from grieving victims. If you would like to perform further analysis, here is a link to our data for you to use as a starting point, including links to all of the campaigns we included.

Unfortunately due to paywalls we were unable to obtain any reliable statistical data on claims and claim payouts from renters insurance policies to serve as a comparison.

“They got out with their pajamas, coats and shoes...no insurance as this was an apartment. The littlest one, Jaxon was about to have a birthday. All his presents had been bought as well.” - https://www.gofundme.com/x4rc3b3h

“That said, her personal effects are likely a total loss. She will likely walk away with just the clothes on her back. And because of the vagueries of San Francisco sublets, renter's insurance is not helping here.” - https://www.gofundme.com/2ywhrb5w

“Everything in garage was destroyed. Once the water was shut off, it was determined that the tenant in that apartment had tampered with his plumbing and had compromised the main waterline for the entire building. Why this man wasn't and hasn't been evicted is completely beyond any sane reasoning. “ - https://www.gofundme.com/8rd5vbt8rc

“They lived in the apartment building that everyone knew burned to the ground that very first day. They can't even depend on insurance since they were renters. They are literally starting from scratch.” - https://www.gofundme.com/tx4bv7pn

“I didn't have insurance (stupid I know) and I definitely don't have any money... Not throwing that out as some passive aggressive hand me out shit, just stating where I'm at right now.. Not to mention all our things, couches, bed, clothes, food, etc… Everything is up in the air right now, and it fucking sucks.” - https://www.gofundme.com/thombus

This was not an easy project to research. It was story after heartbreaking story of loss, grief and destruction. It has taken nearly a month to tally all the results because we could handle all that loss and grief in small chunks.

There were only two reassuring factors in results. There were 678 results for “apartment fire insurance” on GoFundMe. I must admit that this was fewer than I had expected to see, given that there are thousands of victims of emergencies looking for help on the site, and given that just over 5% of all homeowners file claims on their property insurance policies each year. Also, there were no fatalities mentioned, which is always a relief when you're reading about major catastrophes.

However, that $1.1 million figure requested by our 100 surveyed campaigns is not a small number. And the very low rate of completely funded campaigns – just 21% - does not bode well for those who seek to replace renters insurance with crowdfunding. Our results show that unless you have enough friends with deep pockets to fully fund you within 30 days, your chances of reaching your goal are practically nil.

We were startled by the number of single mothers affected – nearly a quarter of the victims were single moms, far exceeding the representation of any individual occupation. Perhaps the most valuable thing you can give to a single mom at her baby shower is a year of renters insurance.

The property loss from catastrophes included the expected smoke, soot, and fire damage along with flooding and water damage. Many reported that additional items had been stolen upon returning after the fire. But the overall loss can be much greater. Two campaigns reported that their landlords had charged them for the damages. Many offered thanks to the Red Cross for providing them with basic supplies like toothbrushes, clean underwear and a change of clothes, but one expressed disappointment that this was all they received. Many included security deposits and first month's rent at a new location in their list of needs. One Section 8 tenant faced months of homelessness and couchsurfing as she returned to the bottom of the waitlist for a new subsidized apartment.

I asked again about the 2 wedding dresses that were hanging on my change room rod, and he said" if there were wedding dresses, they are no longer there." What will I tell these brides? What will I say to them? All my machines, my fabrics, my notions such as threads, needles, zippers ect. not covered. I had no insurance! I have lost everythingeverything! Everything I have worked so hard for all these years. - https://www.gofundme.com/2jztw7d8

The damage affected people from all walks of life, not just the poor and unemployed. Even firefighters and social workers, who are exposed to victims of apartment fires on a regular basis, were affected. We expected to see a large representation or lower-income professions and unemployed individuals, and this expectation was proven to be correct.

The 2015 US Poverty Line was set at an annual income below $24250 for a four person household. The average estimated income ($33904) of those who listed their occupations is above this, at the 45.6th percentile of all US incomes. However, the maximum estimated income of any listed occupation was at $59000 – not wealthy by any stretch of the imagination.

Before we draw any conclusions about the income of the affected parties, we must bear in mind that occupations were only included in 45 of our 100 surveyed campaigns. The rest may have assumed that every donor already knew what they did for a living. They may not have thought it relevant. But we do find it interesting that every one of these campaigns mentioned insurance even if the victims' sources of income were omitted.

Similar to reported occupations, causes of the fire were only reported in 45 of our 100 surveyed campaigns. Those who omitted the cause cannot really be found at fault for this omission – sometimes the fire department can't figure it out, or if they do, it may take them months of investigation. But of the campaigns that did list a cause of fire, we can conclude that the victims were rarely at fault for their loss. Electrical fires were to blame for many of the fires, and while this may be due to tenants overloading antiquated wiring, the existence of that antiquated wiring is of equal concern.

Laundromats are dangerous neighbors. Of the 4 campaigns involving fires caused by on-site businesses, 3 of them originated in a laundromat or dry cleaning business, with the outlier starting in a restaurant. This was a surprise to us, as we figured most fires caused by businesses would come from restaurants.

I know now how important renters insurance is, didn't think it would happen to me until it happened to me... - https://www.gofundme.com/rdsdx9t4

24 of the victims actually did have renters insurance. We were somewhat disappointed to see that 10 of them started campaigns in anticipation of a slow turnaround time on their claims that would exceed the time required to fully fund their GoFundMe campaign. We could not find statistics on claim payout times in the US, but we did find two anecdotal interviews that provided a timeframe of 2-4 weeks. Many states do have laws specifying how long an insurance company has to pay out on a claim. In Illinois the law states that insurers must respond to claims within a "reasonable time," and that they must provide you with forms to file a claim within 15 business days after you request them. By contrast, only 16 of the 100 campaigns fully funded in 30 days or less, with an additional 8 reaching their goals at 60 days. The unfunded campaigns had a median length of 210 days – that's over half a year!

We should point out that even though 10 renters anticipated slow payouts from their insurers, only one reported that he was actually dealing with red tape at his insurance company that was delaying payment of his claim.

14 of the victims reported that their insurance was not sufficient to cover the replacement of all of their belongings. 5 of these campaigns indicated that high value items had been lost, including musical instruments, expensive shoe collections and priceless antiques. In other cases the deductible (the amount that the injured party must pay out before insurance kicks in) was prohibitively high.

3 of the campaigns indicated that they didn't know renters could even get insurance. This was another number that was lower than we expected to see.

The most frustrating group of all was the 7 campaigns where victims admitted that they had insurance in the past but had let their coverage lapse for any number of reasons. These are the ones that had made an effort but lost out due to basic human error.

So what have we learned from this?

If all of this has got you itching to get hooked up with an insurance provider, maybe it's time to head over to Yelp and start making some calls. We'll be right there with you, making sure our coverage is up to date!