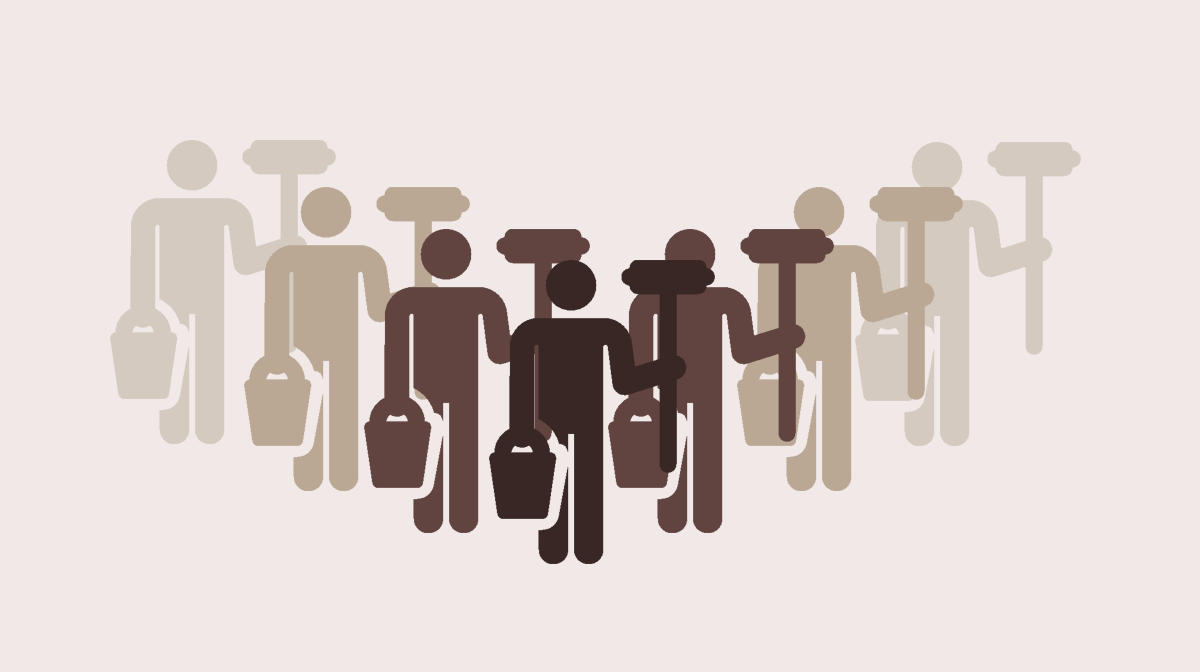 When I worked for a local property management company here in Chicago we had a staff of about 25 people. 5 of us worked in the office or as supervisors. The rest were all maintenance workers. I'm not sure how many of our crew were citizens and how many were undocumented, but I know that out of the whole company only four of us were born and raised in the US. This sort of staffing scenario was not uncommon among the other companies working at our level.

Renters in Chicago will find it very rare to encounter a maintenance worker at their apartment building without an accent. Most of those working in property maintenance who were born & raised in the US are approaching retirement age. Residential rental maintenance relies heavily on the immigrant population - a population that is now under intense scrutiny from the federal government.

Our crew worked 10-12 hour days. I'm not sure how much they were paid but I'm sure for most of them it was below minimum wage. On the last day of the month and the first day of the month those 12 hour days could stretch to 16 or more as they tried frantically to turnover huge number of apartments between renters across our many buildings. On some months those 20 guys would flip 80 apartments or more in two days, painting, patching and cleaning them, hauling out broken fridges, replacing toilets, re-tiling bathrooms. These days, 7 years after I left, many of them are still working there.

Out of curiosity I did some digging to see how Chicago's apartments might be affected by increased crackdowns on undocumented immigrants. I used the US Census Bureau's 5-year ACS data from 2006-2010 (Charts EEO-ALL01R and EEO-CIT02R if you want to play along at home), along with recent unemployment statistics for the Chicago area from the US Bureau of Labor Statistics. Now it is important to remember that the Census statistics only count Citizens and Non-Citizens in each occupation. They do not draw distinctions between immigrants with work visas and undocumented immigrants.

According to the Bureau of Labor Statistics, Chicago had an unemployment rate between 5.2 and 5.6% in the second half of 2016. So, just over 1 in 20 people who were able to work didn't have jobs and might be available to fill in the gaps left behind if non-citizen workers were to suddenly vanish from the hiring pool. However, not all of them would be willing or interested in taking on positions in maintenance and construction. Some of them aren't physically capable of doing it. Others would consider such work to be beneath them. A recent study covered in the Chicago Tribune found the distribution of undocumented immigrant workers to be uneven across different job categories. Citizens gravitate towards business, management and the arts. There is no reason to think that this would immediately change if our immigrant population went away.

There are two occupational categories that are in high demand within the apartment business: maintenance and construction workers. There are 61610 maintenance workers in Chicago, spread across jobs such as pest control, groundskeepers, custodians and maid service. Only 63% of them are US Citizens. Think about what would happen at your workplace if 37% of your coworkers suddenly vanished.

The Chicago construction industry has a lot more citizens working: 89.3% of the 43105 construction workers living in Chicago are citizens. However they aren't evenly distributed across all types of construction.

Here are the non-citizen worker percentages in some sub-segments of the Chicago construction industry:

So we see that the US citizens are gravitating towards indoor work and machine-assisted work, leaving the outside work and physical labor in this cold, windy city to the newcomers. Whether this is due to prejudice, tradition or personal preference is unknown - probably a combination of all three.

One can venture a guess as to how a city with a 5.5% unemployment rate would cope if 37% of the maintenance industry and 10% of the construction industry vanished over the next 4 years. Also, although there are no hard numbers readily available, my own personal experience tells me that the number of second generation workers in these industries is also quite high. Some of them would leave with their parents. Others would stay. Either way the impact of losing these workers would be enormous.

Out of curiosity I also looked at real estate agents and property managers, the "business and management" side of the apartment industry.

So the white collar part of the rental industry would remain largely intact. However, as any agent would tell you, it's much easier work showing an apartment that's already been finished by maintenance crews. Those agents and managers might find that in the absence of maintenance and construction workers they would be stretching to put lipstick on increasingly decrepit pigs of apartments.

Like it or not your apartment is probably still standing because of immigrant labor. I had ultimate faith that if Godzilla were to stomp on any of our buildings that our crew would have it back in one piece within a month. Apartment maintenance is a time-sensitive business. When you report something broken in your apartment the clock starts ticking. When that broken thing happens to be your furnace or your plumbing, the clock ticks down really quickly. A labor shortage could prove to be not only a legal disaster but potentially deadly.

Landlords are not going to be able to replace immigrants working double shifts for below minimum wage with US Citizens at legal pay rates in sufficient numbers to keep up with their current pace without severely increasing rent rates. If you think that unemployed workers in other states would move to Chicago to fill these physically demanding, low-paying jobs, think again - Illinois tied with Alaska for the highest unemployment rate in the country less than a year ago.

It would be nice to think that future waves of immigrants would be greeted more warmly and able to enter into the jobs that they had in their original countries. After all, our maintenance crew weren't painting and patching in their homelands - we had a former software developer and a dentist in the bunch. In an ideal world we wouldn't be forcing anyone to work 12 hour shifts for less than minimum wage - not in America, not anywhere. There's something to be said for making a rookie earn their stripes in the most demanding jobs but to keep them there for 12 years is pretty harsh. But if immigrants are willing to work these jobs that keep Chicago's apartments standing, we should all be grateful.

Renters have been asking me what they should be focusing on over the coming years. Given the new President's attitude towards immigrants I would advise them to learn to fix things in their apartments, or to find ways of protecting the workers who've been doing so all along.

2 thoughts on “Immigration Could Be Your Apartment’s Achilles Heel”