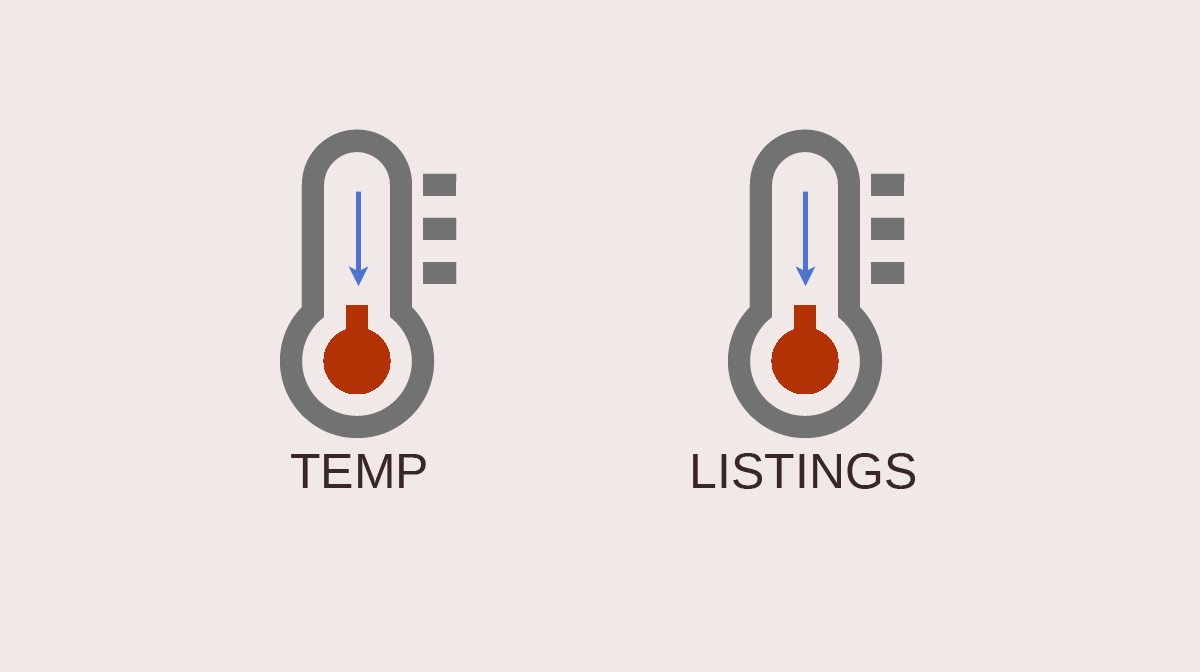 As of the time this article goes live, there will be two days left in the 2017 Chicago apartment hunting season. This is not the start of a slow decline. It does not occur on a variable date like seasonal weather changes. It is a hard, abrupt ending to widespread apartment availability for all areas of the city except the heart of the downtown district. Five years ago I did an article about the offseason for my old blog. The topic bears revisiting, as it tends to catch even experienced real estate agents by surprise.

Included in that article was a chart of seasonal rental market fluctuations from the Greater Chicago Multiple Listing Service (MLS). I'm going to chuck it in again below. (Hey, if 10 year old data is good enough for the census bureau, it's good enough for us.)

See what I mean? The demand for apartments falls off by about half every winter. Even in the earliest years when the MLS had just started to include rental listings, shown at the left, we still see those peaks and valleys.

With an annual drop in demand comes a drop in supply. The larger landlords have learned to expect this sawtooth pattern and many will structure their lease expirations to avoid the winter. Most of the October 1 listings were actually open August 31. Very few leases expire on September 30, as they must be filled by October 1 or risk sitting empty until spring. No landlord wants to pay to heat an empty apartment. No landlord wants to patrol an apartment for squatters all winter. An empty apartment for half a year is the landlord's equivalent of being unemployed for half a year.

But there's still some demand for apartments in the autumn and winter in Chicago, and I fear that Chicago landlords have taken their restriction of vacancies to an extreme. What we face now after years of this cycle is actually a shortage of wintertime apartments in some areas of the city. So, if you're one of the unfortunate folks who must move between October and February, here are some pointers about how to structure your search.

Be willing to settle.

Vacancies at this time of year fall into four categories.

The listings in the first group are business class apartments. They are marketed towards high end executives and international workers who are coming in for only a few months. They expect that anyone looking will have a relocation package and a high salary. They are mostly located downtown - think South Loop, River North, West Loop.

The recently renovated units are great if you can find them, but experienced landlords do try their best to avoid having renovation projects run so late into the year. They will be few and far between.

Apartments left behind (or still occupied by) renters who are breaking their lease are unpredictable. They will appear on the market at odd times. They may be shown by a tenant who is leaving because they are unhappy, but won't say as much to you.

Listings from landlords who are still unaware of the market's seasonal changes should be avoided. The last thing you want is to spend a winter living with a clueless newbie landlord.

No matter which category you wind up with, it's important to remember that the listings will appear on your site of choice at a trickle rather than the summertime gush. Much like the wintertime produce selection at your local grocer, you have to take what's available and it may have a few dings. On the bright side, the number of renters competing with you for these listings will be far, far lower.

Normally during the peak rental season a landlord will learn of most of their new listings around the same time. They will send out lease renewal offers to their existing tenants with deadlines. Because many off-season vacancies are dependent on construction or broken leases, new fall and winter vacancies could come on the market on any weekday. Therefore it's important to stay in regular contact with leasing agents who represent landlords you like.

Given how slow the market becomes during the winter, I wouldn't worry about being seen as a bother to any agent on your follow up list. Trust me, most of them are not doing much else at this time of year.

The only caution I would put on this is to be careful with agents that work for apartment locator services. These companies tend to "lose" many of their staff after the season ends, so they may actually be short-handed for a few months. Even these agents should have some time on their hands, though, and they will also get listings at unexpected times of the month. In fact, this is a great time of the year to work with a locator, as the agents who remain on staff are usually the top performers of the previous rental season.

Do not expect a long lead time.

Almost every listing you'll find on the market between October and February will be vacant. If not, it will be available with very short notice, usually less than a month. Landlords will give preference to renters who are looking to move as soon as possible. During the off-season, you'll have the best luck looking around 3 weeks before your move date. Yes, this seems short, but believe us, you'll find something, and yes, you will have time to pack and hire movers in time.

Remember what I said about landlords structuring their lease expirations to avoid the winter? This will also apply to you. If you sign a twelve month lease in the off season, next winter the landlord will once again face an off-season vacancy. They will probably offer you a lease that ends during peak season, which means either a very short lease or a very long one.

If they offer you a lease for less than a year, it means one of two things. They may think you're a high risk applicant. Alternately, they lowered the list price to accommodate for the low demand, and want to get you back up to market rates as soon as possible.

If it is even remotely possible, try to negotiate a lease longer than a year. Turnover costs are one of the highest consistent expenses for landlords. You can argue that it means one less vacancy that the landlord will have to fill again in a few months. Don't mention to them that you'll be locking in your rent rate for a far longer time.

Evictions in Chicago take a very long time. Many autumn vacancies begin as eviction cases filed in the spring. A landlord who has just come through a six month eviction lawsuit will not want to repeat it a second time. This is doubly true for landlords who have just come out of their very first eviction. Landlords in these situations will look at you with far more intensive scrutiny than they otherwise would to avoid getting burned again.

It's understandable for someone to be extra cautious after they've just been burned. But this does not give a landlord an excuse to violate fair housing law. If you are searching with a blemished record - damaged credit, prior evictions, etc. - it's worth having a conversation with a landlord about their standard screening practices. If they don't have a consistent method that they use with every applicant that they can rattle off quickly, move on to someone else.

Keep an eye on sublet listings.

Given how few leases expire during the autumn and winter, it stands to reason that many renters who need to break their leases will be trying to sublet or re-rent their apartments on their own. Doing so will probably lower the amount they need to pay in early termination fees.

Sublet listings can appear in peculiar places. Craigslist has their own section for sublets separate from the regular "apartments for rent" section. College students will post flyers in student unions and around campus. You may see signs posted on bulletin boards in cafes and shops.

Your own personal network can come in handy here as well. Keep an ear to the ground for friends and acquaintances who are going through major life events at this time of year. Their new job, new partner or breakup could mean an open apartment for you.

During any other time of year, I would suggest that anyone in the lower to middle income range avoid the downtown area of the city. The prices down there tend to be completely outrageous and this doesn't change much in the off-season. However, you may find yourself looking further into the city than you normally would during peak season if only to find any vacancies at all. As prices tend to relax a bit during the off-season, this is a good chance to try out a neighborhood at least one or two El stops further into the city than you'd normally consider. Just be careful to check the going rate for apartments in new areas before you zero in on a location. Scammers prey on renters who are looking too far below market rates at any time of year.

What are your tricks to finding a good off-season apartment? Are you a Chicago renter looking to replace yourself in your apartment during the autumn or winter? Let us know in the comments!