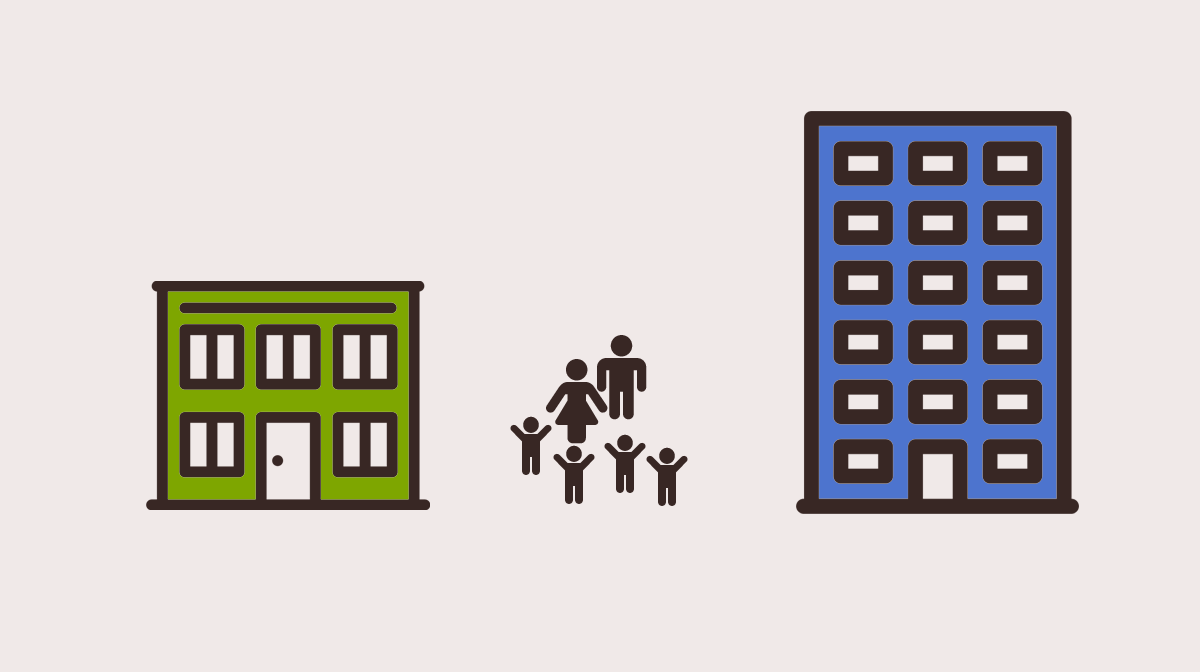 A few years ago I heard tell of a wealthy family from India who purchased real estate in a West Loop loft building. There were about five separate multi-generational family clusters all living together. They jointly purchased an entire floor of the building - five or six separate condominiums - and combined them into a single living space. The American-born Realtor who told me of the deal did so with a tone of "can you believe those crazy immigrants would do something like that?" Buried in this attitude, not far below the surface, is an inherent problem between modern US residential building practices and the cultural traditions of the people who live in them.

A lot of news ink has been spilled lately about new construction of apartment buildings in downtown Chicago after a lengthy slow period. In reaction to these stories I see comments about the tiny size of the apartments, the "Transit-oriented design", and how no average renter will be able to afford this new luxury housing. "Tiny boxes very high up" is how a friend of mine describes them. When you compare these new buildings with the vintage walk-ups that cover the city outskirts you can see the results of a clear shift in American attitudes towards outsiders and towards themselves.

There is an anthropological/psychological train of thought that divides societies into collectivist and individualist cultural belief patterns. Collectivist societies build their identities around the well-being of the group. They are more concerned about what family members and elders think of them. They move together in family groups. Countries with predominantly collectivist cultures include Mexico, Russia, China, India, most of Scandinavia and much of Africa.

By contrast, individualist societies value the self and elevation of the self. They value independence, self-reliance. Someone in an individualistic culture would value the opinion of an outside authority figure more than that of their own family. Children are encouraged to leave the nest as soon as possible. Countries with individualist cultures include the UK, the US, Australia, Canada and many former Soviet bloc countries in Eastern Europe. It should be noted that a century ago many of those Eastern European countries were collectivist (by force if not by choice), and that even the US had a much more collectivist approach before World War II.

Most of the vintage buildings in Chicago went up between 1880 and 1940, between the Civil War and World War II. At this time the country was barely a century old itself. Cultures were still pouring into the "melting pot" but largely had not fully melted yet. US culture was still collectivist in nature. Two-flats and courtyard walk-ups were built by families for their own use, with space for multiple generations or a little extra income on the side. Living rooms and kitchens were large because it saved heating energy in a pre-electrical era, but also because they were places for the family to be together. Bedrooms, however, were tiny, as there was little need to spend so much time alone in private. We were only a few decades away from a time when large groups of immigrant families in wagons had spread out across the western portion of the country.

With the end of World War II, a major cultural shift started to occur. Over the course of two world wars the US had established itself as a military presence but had also made its debut as a member of the global society of nations. No longer did it think of itself as an emerging baby country. It was all grown up and ready to play with the adults. As soldiers returned home they had new families - their squads and platoons. They moved into spread out suburban homes with electricity and central heating. The culture of the individual gradually supplanted the collectivist culture. Having a family that needed a large space was no longer the sign of a normal human being. It was instead the sign of enormous prosperity in a culture that celebrated the individual.

Holiday meals went from a slightly more lavish version of the regular Sunday dinner into huge pretentious events where children must shock and appall their elders by announcing their latest route of defying tradition. Working in the family business is now only "cool" if you somehow manage to take charge of it, use new technology to turn it around and make it stunningly successful in the eyes of outsiders.

The trend of making large apartments with many bedrooms vanished. If you had a big family you obviously had to have a house, a status symbol to impress and keep up with the Joneses. Starting from the 1950s we saw the big luxury condo buildings go up along the lake front, then the four-plus-ones with their tiny living spaces and low ceilings. We saw the buildings get taller and the apartments get smaller as the concept of "renter" became merged with "independent young bachelor" and, eventually, "independent young bachelorette." At least, the concept became that way in the eyes of building developers, architects and landlords.

In reality, a large percentage of the rental population remained as it was, family groups living in pre-WWII buildings that grew older and older. If you are not white in Chicago, chances are you live in collectivist Chicago. These days the rental population of Chicago consists equally of young fourth generation individualists and collectivist families, but the industry only sees and serves the former while ignoring the latter.

When someone from a collectivist culture falls into misfortune, outsiders will say, "what a horrible circumstance has occurred to him! We should help." When someone from an individualist culture has similar bad luck, outsiders take a more scornful approach. "She brought this upon herself through her own bad choices. Something must be wrong with her. We should avoid her."

When someone cannot pay their rent or their bills, the cause may be that a sudden change in employment, a death in the family, an unexpected illness, a forgotten student loan coming due. It could also be that they're simply irresponsible. One cannot know the true reason, but the individualist landlord culture in the US assumes laziness and malice. So we have the modern rental application where every renter must be screened for bad credit, unpaid debts and prior evictions with the implication that these problems are hallmarks of bad people rather than bad circumstances.

Collectivists seek housing where they can live together. They will look for blocks of apartments together near existing relatives who preceded them into the country. They will look for apartments with dining rooms and big open spaces. In Chicago this means they cluster in older neighborhoods with the pre-WWII buildings. If they prosper, they will move to houses in the suburbs, not into tiny downtown boxes. Or, like the Indian family, they will buy up huge clusters of condominiums and combine them.

I took a look at the 100 most expensive new construction residential building permits issued in Chicago over the past five years. To a one, they had Chicago-based owners, Chicago-based architects. Anglo-Saxon, European, and Western names. While the companies may have actually represented international interests, they are advised by US investment experts with individualist tendencies. So we see new apartments going up with tiny apartments. Big bedrooms for roommates at opposite ends of the apartments. No dining rooms. Separate small balconies instead of common backyards and shared porches. Flashy showcase kitchens. Common areas where the individualist renter can impress strangers. Each building must have its own fancy name to distinguish it from its identical neighbors.

Of course land availability factors into it. And of course technological developments have a part in it as well. But a huge part of the lopsided apartment development trends of late stem from individualist advisors and investors designing for individualist renters, because those are the folks who will pay big money to live in a status symbol.

I predict that we will someday see a developer, probably someone with roots in Sweden, Mexico or East Asia, make big strides in Chicago by building with a collectivist approach. I don't say this from any humanitarian pipe dream of investors suddenly deciding to build housing instead of cash cows. By ignoring the housing needs of collectivist residents developers and investors are ignoring about 40% of the city's population. Renters with collectivist preferences can offer landlords lower turnover rates and fewer demands. The developer who successfully taps into this market stands to make quite a pile.

One thought on “The Growing Cultural Disconnect in Apartment Architecture”