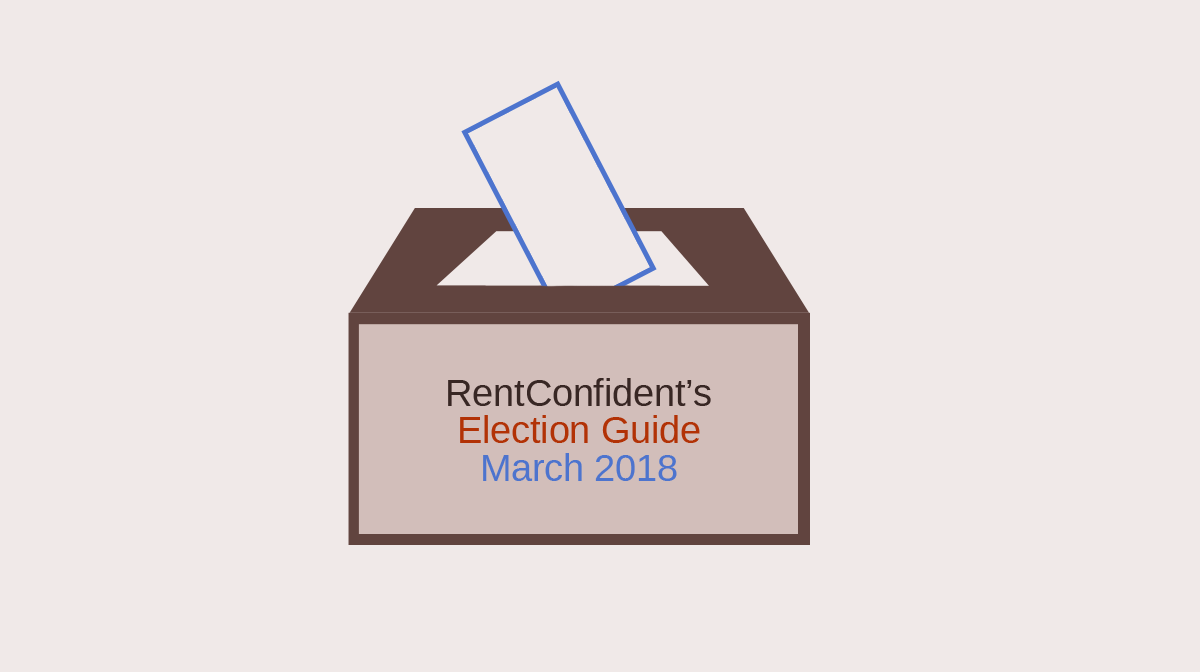 It's March! In Chicago this means it's election season. We've previously discussed the low level of civic activity among renters, and how the input of renters at the polls can affect the caliber of a neighborhood. We've also provided a list of all the laws that went into effect this year as evidence of what the incumbents have accomplished while in office. We also talked about how renters are under-represented in Chicago public office. Now it's time to put all of that together, get your butts off the couch, and go vote.

While the standard November election day is still important, a lot of the Illinois official business actually occurs at our statewide Primary voting in March. This year (2018) the Primary election will occur on March 20, just a few weeks away. Since we have a lot of newcomers and folks who have recently moved reading this blog, we figured we'd spend this week reviewing the basics of voting in Chicago.

Why is the March Primary so important in Chicago?

Chicago is pretty much a one-party city. While there certainly are many in the city who are not Democrats, a look at the city council (48 Dems, 1 Independent, 1 Republican) will tell you how strongly the Democratic party dominates the Chicago political scene. At the November elections we see one representative from each party go head to head for each office. But the majority of the candidates will all be Democrats, which means they are actually winnowed out at the primaries instead.

Should You Vote Here or at Home?

Renters are often in town for short periods of time, many of them staying for less than a year and certainly for less than the full elected term of any major political official. They are faced with the dilemma of choosing to vote in Chicago for Chicago and Illinois politicians, or voting by mail for politicians in their home state. Illinois is not likely to be a battleground state and Chicago is definitely not likely to be a battleground city, at least not for 2018. If your home state is on the fence between parties you should probably vote there if you can. If not, it's definitely worth your while to register to vote here in Chicago for the time you're here, at least so your voice can be heard on the referenda.

Can Unaffiliated People Vote in the Primary?

In Illinois the voter registry does not include a formal party affiliation. Voters choose which ballot they would like to use at each election. In this primary three ballots will be available: Democrat, Republican and Independent. The first two present candidate slates and four referenda. The Independent ballot only presents the referenda:

How to Check Your Registration, Preview the Ballot and Find Your Polling Place

Go to the website of the Chicago Board of Election Commissioners. The first link on the page should be to Your Voter Information for the March 20, 2018 Election (or, if you're reading this from our archives, the next scheduled election). Click the link and fill in your address on the next page. If you are registered, enter your last name as well to verify your registration.

Upon submitting the form you will be taken to a screen verifying your registration, along with your polling place, sample ballots for your precinct and early voting instructions.

If you are not registered you will need to bring two forms of ID to the polling place on election day, at least one of them showing your current address, and you will be able to register and vote at the same time.

A limited number of polling places are already open every day for early voting. Early voters can stop by any of these locations, not just the one closest to them, to cast their vote or register to vote through March 19. There is also a vote by mail option available through March 15. You can either vote early or vote by mail or vote on primary day.

Note that if you are a registered sex offender and your assigned polling place is a school, you are required by Illinois law to use an absentee ballot or vote early at one of the locations that is is not a school or day care facility.

Learn about the Candidates

Since you've got 19 days and the ability to preview your ballot, you've got plenty of time to research the candidates and make your decisions. The ballots in Chicago can be quite long, so we recommend assembling a list of your chosen candidates on your phone or a small piece of paper to bring with you into the voting booth. We definitely recommend using a variety of sites to form your opinion rather than relying exclusively on the opinion of a single newspaper or pundit. Here are some options we recommend:

What's Up with All the Judges?

Every ballot in Chicago elections is usually at least 50% judges. You get through the list of all the offices you recognize, plus the water district and all the random Cook County seats (some of which are very important this year...) and you're suddenly blinded by the thousand suns of a full page of judges to elect. These candidates rarely mount big campaigns. You won't see lawn signs or billboards for most of them. But they make up the majority of your ballot. Some are being voted to the bench for the first time. Others are running to retain their seats on the bench.

Elected judges must receive 60% of the vote every six years to retain their seats, but in Cook County no more than 14 judges have ever lost their seats in an election. We've reelected individuals who have been convicted of fraud and battery. We've reelected candidates who never even showed up to work for the majority of their term. This means that once we vote them in, they're effectively on the bench until they retire, die, or are elected to a different bench.

David Orr, who currently serves as Cook County Clerk and once served as the driving force behind the creation of the Chicago Landlord-Tenant Ordinance, wrote a great article on the problems of Cook County judicial elections for Huffpo back in 2010. However, the system remains unchanged, so we're stuck with a ballot full of judges.

Cook County judges are the people who are responsible for hearing eviction cases, usually without a jury, so it's quite important for renters to have their say in who winds up sitting up there. It is in our opinion a downright shame that voters will not bother to research the judges and just run down the list selecting, say, all female names or all minority names.

Fortunately, unlike other offices, candidates for judges are usually already at least attorneys if not already elected as judge on a different bench. They have established track records which are observed by other attorneys and judges. The local bar associations know which ones are competent, which ones have been accused of fraud, and which ones are likely to go for years without ever showing up to work.

For every election, the Committee to Elect Qualified Judges gathers recommendations from major bar associations in the area and compiles them all into a chart for public use. You can find this year's recommendations at voteforjudges.org.

On election day, bring at least one form of photo ID with you to the polling place. Ideally bring two and make sure one has your current address on it. Paperwork gets lost. Computer systems crash.

Expect to wait in line for at least an hour, especially during the early morning, lunchtime and later evening. Be happy if you get out faster. Do not rush any voters ahead of you.

Polling places are assigned within walking distance of your home. They may not have parking available. Plan to walk or bike to your polling place if you are able.

Be on the lookout for electioneering out front of the polling place. Each polling place will have a 100 foot boundary within which candidates representatives and signage cannot stand. This is to prevent candidates' advocates from harassing voters on their way in or out. If you see anyone engaging in illegal electioneering within the boundaries, report them to the election officials inside and ideally also to the Chicago Board of Election Commissioners at their election day hotline, 312-269-7870.

Note that electioneering laws also apply to you. Make sure you are not wearing or carrying anything that bears the name or logo of a candidate on your body or you may find yourself ejected from the polls.

Help Others Get to the Polls

While polling places are supposed to be within walking distance of your home, not everyone can walk. Seniors, disabled voters and parents with small children can all have trouble getting over to their voting location. In previous years ridesharing services such as Uber and Lyft have offered free rides to the polls on election day but we have not heard at this time if they will be repeating the promotion for the March 2018 primaries.

Even if you are not registered to vote in Chicago, you can help your neighbors get out and participate. If you know of anyone in your neighborhood who has trouble getting around, offer to help them on the 20th.

This is not the end of our 2018 primary coverage! Next week we'll be back to explain what each of the offices on the ballot actually do. On the 15th we will provide our own list of recommended candidates.